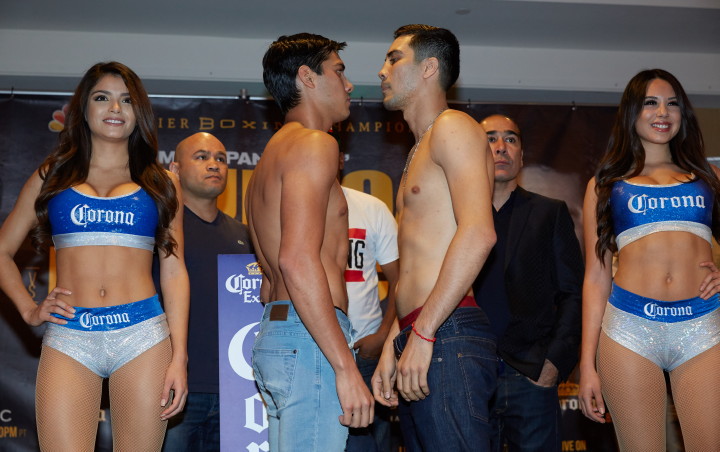 (Photo credit: Suzanne Teresa/Premier Boxing Champions) By Dan Ambrose: Light welterweights Omar Figueroa Jr. (25-0-1, 18 KOs) and Antonio DeMarco (31-5-1, 23 KOs) both came in well over the 140lb limit during Friday’s weigh-in for their fight on Saturday night on Premier Boxing Champions on NBC from the AT&T Center, in San Antonio, Texas.

Figueroa weighed in a whopping 151lbs, which puts him 11 pounds over the light welterweight limit. DeMarco wasn’t much better in coming in at 149lbs. For the 25-year-old Figueroa, this is his second straight fight that he’s coming in over the 140lb limit.

In his last contest against former two division world champion Ricky Burns last May, he weighed in at 141.5lbs, and ended up struggling badly to win a controversial 12 round decision. Figueroa might have already grown out of the 140lb division after having grown out of the lightweight division after briefly holding the WBC 135lb title from January 2014 to November 2014.

The World Boxing Council changed Figueroa’s status to Champion in Recess last November. I think the odds of him getting back down to 135 to fight for the WBC lightweight title are pretty much zero, because Figueroa is heading towards junior middleweight, but without the punching power, hand speed or talent to compete with the best 154lb fighters. It’s looking like Figueroa’s career might end up him fighting nobodies on PBC or fighters from yesterday like DeMarco, who has lost his last two fights and looks to be a shot fighter. 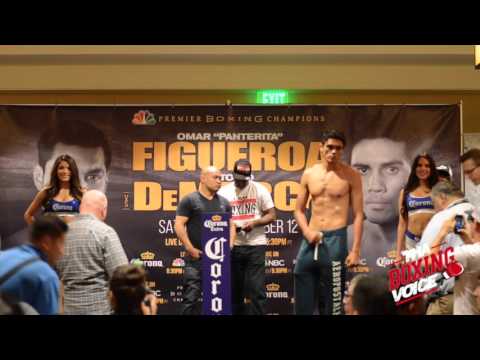 If DeMarco and Figueroa have to try and make careers in the 147lb and 154lb divisions, I don’t see either of them being good enough to be more than bottom ranked contenders at best. They lack punching power, hand speed and overall talent to compete in those divisions in my estimation.

Struggling heavyweight Chris Arreola (36-4-1, 31 KOs) weighed in at a slim 236.4lbs for his 10 round bout against Travis Kauffman (30-1, 22 KOs). This is a must win fight for the 34-year-old Arreola, because he’s had two recent defeats to Bermane Stiverne, and a controversial 10 round draw against journeyman Fred Kassi. While there’s nothing for Arreola to be ashamed of in losing to a fighter like Stiverne, it’s not a good sign that Arreola couldn’t beat Kassi. A lot of boxing fans thought Kassi did enough to deserve the win in his fight with Arreola last July on Premier Boxing Champions.

Kauffman weighed in at 236.5lbs as well.

If Arreola loses this fight, then he might want to consider hanging up the gloves and walking away from the sport, because he should be able to beat a fighter in Kauffman’s class. Arreola’s management moved him backwards a step after his fight with Kassi in order to get him a win. But Arreola can’t make a career out of fighting guys like Kauffman. If he wants to get another shot at a world title, then Arreola is going to need to beat guys like Stiverne, Bryant Jennings, Carlos Takam, Anthony Joshua and Alexander Povetkin.

Right now, I doubt Arreola could beat any of those guys, and that’s the troubling thing. Unless Arreola is going to get a title shot given to him by a champion like WBC heavyweight title holder Deontay Wilder, then I don’t see him getting any more title shots. I don’t think Arreola has the talent any longer to work his way up the heavyweight food chain to fight for a title any longer. The division has improved and Arreola hasn’t. 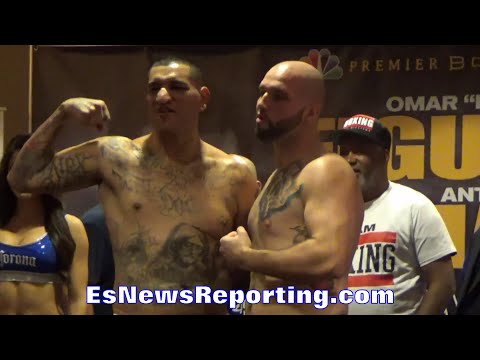 Donaire vs. Juarez tonight on truTV »