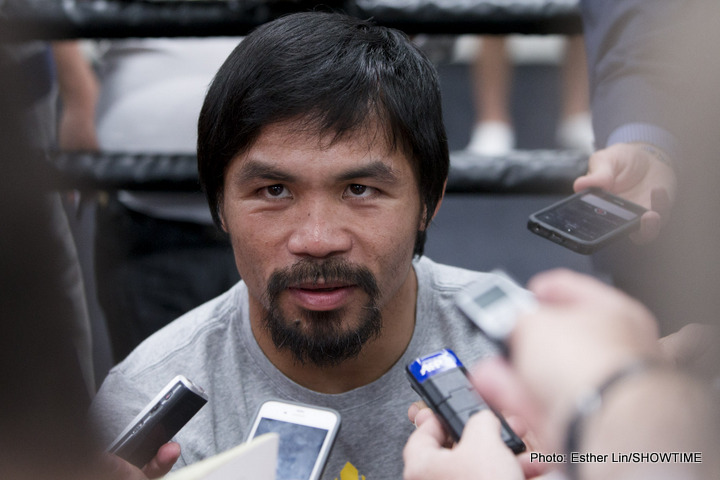 By Chris Williams: Manny “Pacman” Pacquiao (57-6-2, 38 KOs) will be fighting one of his promoter Bob Arum’s Top Rank stable fighters in 32-year-old WBO welterweight champion Timothy “Desert Storm” Bradley (33-1-1, 13 KOs) next in what could be Pacquiao’s final fight of his career on April 9th at the MGM Grand in Las Vegas, Nevada.

It is still not official yet, so there is a possibility that Pacquiao could face someone else on 4/9. With Arum saying that it is going to be Bradley, you have to assume this is what the case is going to be.

Pacquiao fought Bradley in 2014 in beating him by a 12 round decision, and in 2012 in losing by a controversial 12 round decision. The two fighters are at 1-1 right now as they approach their rubber match. Never the less, boxing fans believe that Pacquiao deserved to have been given the victory in the first Bradley fight too. As such, Pacquiao is basically fighting a guy that he’s already beaten twice in Bradley. Not surprisingly, the interest in the Pacquiao-Bradley third fight isn’t what it should be. However, I’m not sure if that really matters to Arum. Even if the fight brings in low PPV numbers, it would still be a good deal for Top Rank because they won’t have to share the promotion of the fight with another promotional company if Pacquiao were to fight a non-Top Rank fighter. The fight could also increase the value of Bradley if he wins or if he doesn’t lose that badly.

This has to be pleasing news for Arum, as the promotion of the Pacquiao-Bradley 3 fight will be done by Top Rank and he will not have to share the money with another non-Top Rank promotional company. All the money stays in house with Pacquiao fighting Top Rank fighter Bradley. Arum likely would have preferred that Pacquiao fight WBO light welterweight champion Terence Crawford next, as Crawford has never fought Pacquiao before. Crawford’s career would have been greatly enhanced if Pacquiao had selected him as his next opponent. It would have increased the value of Crawford for Top Rank by making him a bigger money fighter.
Pacquiao’s adviser Michael Koncz recently contacted a non-Top Rank fighter in Adrien Broner to see if a fight between him and Pacquiao were possible. However, instead of taking that fight and likely making more money, Pacquiao will be fighting a guy he already fought twice before in Bradley in another retread fight.

“It’s a done deal and it’s going to be a third fight against Timothy Bradley. We took a lot of consideration knowing Bradley has improved a lot as a fighter since the last time they’ve met in 2014,” Arum said to the Manila Times. “Bradley is happy about it of course and that’s really a competitive fight for Manny [Pacquiao]. The report about Adrian Broner fighting Pacquiao is untrue,” Arum said.

You have to wonder why Arum chose to reveal the opponent for Pacquiao in this manner by telling the Manila Times rather than making an official announcement. It’s quite possible that the positive buzz that had occurred with the rumors of a Pacquiao vs. Adrien Broner fight might have had something to do with it.

Many boxing fans liked the idea of Pacquiao fighting Broner, as they saw this as a Pacquiao vs. a generic Floyd Mayweather Jr. type of fight. Broner would have made it interesting in the build-up to the fight with his interviews and his ability to say outrageous things. If nothing else, it would have been a new opponent for Pacquiao.

Arum says Bradley has improved recently. I do not know if you can really say that, because he has only fought two of Arum’s mediocre Top Rank stable fighters in his last two fights in Brandon Rios and Jessie Vargas. It is impossible to know if Bradley has improved because his opposition has been so poor. Rios was an out of shape fighter in his fight with Bradley last November. As bad as Rios looked, I think many of the top 15 contenders would have beaten him on that night. Rios has never shown himself to be a good fighter at 147 anyway. His biggest win was a controversial fight against Diego Chaves in 2014 in which the referee suddenly halted the fight in the 9th, saying that Chaves has hit Rios with an elbow. However, in looking at the fight in slow motion, there was not an elbow thrown by Chaves in that round. Rios was losing the fight at the time of the stoppage. As far as I can tell, Bradley looks like the same fighter he was in his fights against Diego Chaves in 2014 and Pacquiao in 2014. Bradley was held to a 12 round draw in the Chaves fight after falling apart in the second half of the fight.

If Pacquiao is going to resume his career in the second half of 2016, he presumably would still be with Arum’s Top Rank stable until the end of the year. This means that Pacquiao would likely be stuck with the choices of fighting Arum’s fighters Terence Crawford and Bradley. I think Pacquiao could make more money fighting guys outside of Arum’s stable of fighters in facing guys like Adrien Broner, Keith Thurman, or Danny Garcia.

It’s possible that if Pacquiao had fought Broner, he might have made less money than he’ll make for the Bradley fight. Broner has a big ego, and his adviser Al Haymon would be working hard to get him a proportional cut of the loot in a fight against Bradley. Instead of Pacquiao getting a 80-20 or 75-25 split of the revenue for a fight against Broner, he might have had to settle for a 60-40 or 55-45 split. With a split like that, Pacquiao wouldn’t make as much money fighting Broner as he would in fighting Bradley.