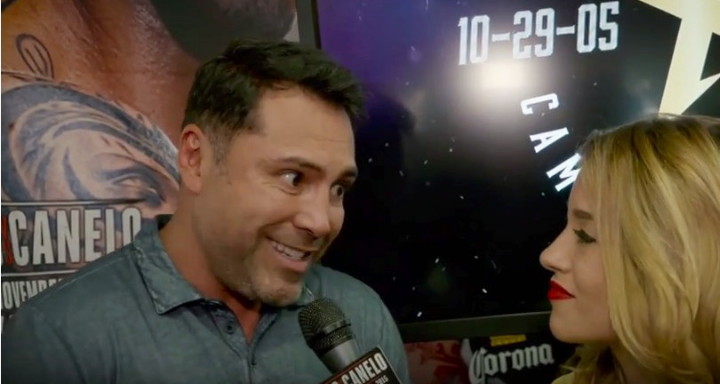 By Dan Ambrose: Out of nowhere, Golden Boy promoter Oscar De La Hoya went after the recently retired Floyd Mayweather Jr. today, calling him “boring” in an interview with Playboy Magazine, and saying that the sport of boxing is better without him being there. De La Hoya said that Mayweather was more famous for his mouth than he was for his fighting, and that he’ll soon by forgotten as a fighter.

“Let’s face it; you were boring,” De La Hoya said about Mayweather to playboy.com. “Just take a look at your most recent performance, your last hurrah in the ring, a 12 round decision against Andre Berto. How to describe it? A bust? A disaster?”

De La Hoya hardly has room to talk in terms of taking a shot at Mayweather for fighting a soft opponent in his last fight of his career. De La Hoya fought Steve Forbes and Ricardo Mayorga towards the end of his own career, and those guys weren’t major players. At least Mayweather beat Manny Pacquiao, a fighter that De La Hoya lost to in 2008.

Mayweather Promotions CEO Leonard Ellerbe responded to De La Hoya’s article, saying that he seems “bitter.” Ellerbe thinks that De La Hoya is just trying to drum up interest for his next fight card by going after Mayweather. Saul “Canelo” Alvarez, De La Hoya’s flagship fighter, is facing WBC middleweight champion Miguel Cotto this month on November 21st, and the timing of De La Hoya’s article in Playboy does make it very convenient for him.

De La Hoya also said that Mayweather beat Canelo when his fighter was young and weight drained, which was basically giving Mayweather no credit for having beaten him.

“He [De La Hoya] just sounds silly and bitter. Even though we know he didn’t write it, they’re just looking for storylines to generate mainstream press,” Ellerbe said to Fighthype.com. “They’re just trying to promote their fight, so they need mainstream press. What’s the biggest name that they can align themselves with to attempt to create a storyline? The same name that everybody uses. The biggest name that’s out there. Floyd Mayweather. Jealousy is a terrible thing…Who did he [Oscar De La Hoya] beat in his prime? He damn sure didn’t beat Shane Mosley. He’s just bitter.”

Ellerbe brings up a good point in suggesting that De La Hoya is name dropping Mayweather’s name to get attention to his big fight coming up. Some boxing fans think UFC star Ronda Rousey intentionally name drops Mayweather’s name every once in a while so that she can get support from the sports world in her MMA fights, which are largely mismatches with her defeating her opposition in one round pretty much every time nowadays.

“Last I checked, he [Mayweather] whooped you,” Ellerbe said about Mayweather’s 12 round decision win over De La Hoya in 2007.

If De La Hoys is looking to get attention for Canelo, then he’s going to need to keep name dropping Mayweather’s name, because I’m not sure how much interest there is in his fight against Miguel Cotto. It’s a decent fight, but not a huge one like De La Hoya has been saying it is. He thinks it’ll bring in 1.5 million PPV buys on HBO, but I doubt it.

I think the boxing public is burned out on PPV fights right now after the Mayweather vs. Manny Pacquiao fight earlier this year, and Cotto-Canelo isn’t the greatest match-up due to both fighters having been beaten by Mayweather in the recent past. We’re talking about Mayweather’s victims fighting each other and asking the boxing public to pay to see them fight. That might not be a good thing when you have two guys that were beaten by Mayweather asking fans to pay to see them fight rather than seeing them fight for free.

« Sullivan Barrera vs. Karo Murat on 12/12, winner to face Kovalev