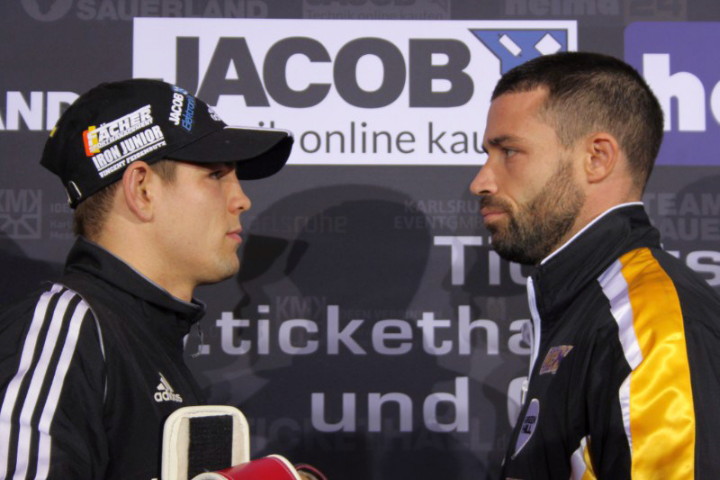 By Scott Gilfoid: Earlier today, WBA 168lb champion Vincent Feigenbutz (20-1, 19 KOs) made weight for his title defense against Giovanni De Carolis (23-5, 11 KOs) for their fight at the dm-Arena in Karlshrue, Germany. The 20-year-old Feigenbutz weighed in at 165.8 pounds. His opponent #13 WBA De Carolis came in at 167.8lbs.

Feigenbutz needs a win in this fight for him to get the winner of the Felix Sturm vs. Fedor Chudinov fight for the WBA “regular” super middleweight title. Feigenbutz will need to earn his title shot the hard way by going through the 31-year-old De Carolis. However, it could be worse for Feigenbutz.

It’s not as if he’s fighting someone really talented like Andre Dirrell. The World Boxing Association’s rankings are pretty mickey mouse though. They don’t even have Dirrell rated in their top 15. They’ve got a lot of flawed contenders in their rankings, such as Sturm, Lucian Bute, Martin Murray, and Julio Cesar Chavez Jr. Sadly, those are arguably the best contenders the WBA has in their top 15 rankings at super middleweight.

It’s impossible to say how good the 20-year-old Feigenbutz is at this point because he’s never faced anyone that you can call a good fighter, and you’ll still be able to say the same thing after Saturday night.

In a way, Feigenbutz is going after one of the easier titles to win at super middleweight. Chudinov is considered to be a weak champion by a lot of boxing fans, and the WBA has mostly weak contenders in their top 15. If Feigenbutz can win the WBA can win the WBA title, he’ll have an easy time for ages due to the WBA’s rankings not having the real quality guys ranked.

‘’The support I have received has been fantastic,’’ said Feigenbutz at today’s final pre-fight press conference. ‘’On Saturday night, I want to repay all my fans with another spectacular performance. I know De Carolis is a good experienced opponent, but once I catch him on the chin, he will wish he never stepped into the ring with me.’’

Also on the card, former heavyweight title challenger Kubrat Pulev (20-1, 11 KOs) weighed in at 245.8lbs for his tune-up fight against 41-year-old George Arias (56-13, 42 KOs) for their 10 round scheduled fight. Arias weighed in at 224.4lbs. Pulev, 34, hasn’t fought since losing to IBF/IBO/WBA/WBO heavyweight champion Wladimir Klitschko by a 5th round knockout last November.

Pulev needs to get some wins behind if he wants another world title shot. He’s still good enough to win a world title if he gets after WBA “regular” champion Ruslan Chagaev.