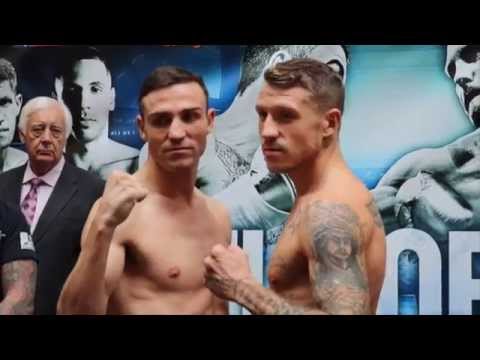 By Scott Gilfoid: Former three time world title challenger Matthew Macklin (33-6, 22 KOs) made weight today for his fight against domestic fighter Jason Welborn (17-3, 6 KO) this Saturday night for the vacant WBC International super welterweight title at the Barclaycard Arena, in Birmingham, UK. The 33-year-old Macklin weighed in at 153 ¼ pounds. For his part, Welborn also weighed in at 153 1/4lbs.

Macklin is in a bad way here with this fight. He should be able to beat Welborn, but you just can’t know for sure, because Macklin has looked so shaky in some of his fights in the last year. Macklin was given a gift 8 round decision over a very average fighter in Jose Yebes last year in December 2013, and he looked terrible in that fight.

I had Yebes winning, which kind of tells you where Macklin is right now with his career. If Macklin loses the fight to Welborn on Saturday, then he might as well pack it in and retire on the spot, because there would be no coming back from this. Heck, Macklin could move down to welterweight, and it still wouldn’t save his sagging career.

This is Macklin’s first fight at junior middleweight since 2006, when he was beaten by Jamie Moore by a 10th round knockout. At the time, Macklin said he wanted to move up to middleweight because it was difficult for him to make weight. But now that he’s struggling at middleweight, he’s moving back down to 154 in hopes that he can find success in that weight class. It sounds like a desperate move to me, and one that won’t lead to success. But I guess Macklin has to do something, because he’s lost 4 out of his last 9 fights, and his career seems to be in free fall for the moment.

Macklin has won his last two fights against obscure opposition in Chris Hermann and Sandor Micsko, but before that, he was knocked out by Jorge Sebastian Heiland by a 10th round knockout. Macklin was knocked out by Gennady Golovkin in the 4th round in 2013, and stopped by former WBC middleweight champion Sergio Martinez in the 11th round in their fight in March 2012. Felix Sturm beat Macklin by a 12 round split decision four years ago in 2011.

.@mattmacklin needs to overcome a tough @welborn12 tomorrow – if he is to challenge for a world title at 154lbs pic.twitter.com/GCAogTPlHZ

I guess Macklin is hoping his punching power will be more pronounced at 154 than it was at 160. The problem is that there are already some good punchers in the division that are better fighters than Macklin like Jermall Charlo and Erislandy Lara, to name just a couple.