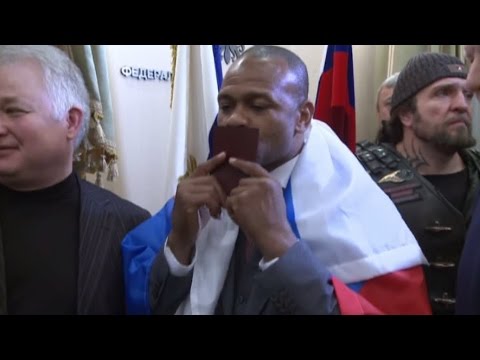 By Tim Fletcher: In front of a large group of press earlier today, 46-year-old Roy Jones Jr. (62-8, 45 KOs) received his Russian passport in a ceremony in Moscow, Russia, and is now officially a Russian citizen. Jones Jr. didn’t have to give up his U.S citizenship like some people do in order to become a citizen of Russia.

Vladimir Putin, the president of Russia, had already given Jones Jr. the green light to become a dual citizen. Jones Jr. will reportedly be fighting for the WBA cruiserweight title against Denis Lebedev on December 12th. This hasn’t been officially confirmed yet, but it makes sense because Lebedev is Russian. Jones Jr. is ranked #6 by the WBO. He hasn’t yet fought a contender in the division, but I guess that doesn’t matter.

Jones is involved with promoting and training fighters, and he needs to be able to travel to Russia frequently. By him now being a citizen of Russia, it helps Jones so that he doesn’t have to struggle with visas each time he needs to travel to Russia. It’s unknown how much time Jones will need to spend in Russia in order to keep his citizenship.

“Thank you very much everybody, mostly to Mr. Putin for presenting me with a passport,” Jones Jr. said to the press in Moscow on Tuesday. “It feels nothing better than to be a citizen of the United States of America and Russia. This is definitely something that was ordained by God and not myself. I had no clue or thoughts in life of becoming a Russian citizen, so this is much bigger than me. It’s much bigger than life. So for me, I’m a person who is here to be happy to enjoy people to help make it a better place to encourage other people to come to Russia, because Russia is good and the people of Russia are good. Thank you again. This is one of the happiest days of my life,” Jones said.

Jones was knockout by Lebedev in the 10th round four years ago in 2011. At the time, that was a bad period in Jones’ career with him losing three straight fights to Lebedev, Bernard Hopkins and Danny Green. since the loss to Lebedev, Jones has won his last eight fights against weak opposition in beating the following fighters: Eric Watkins, Paul Vasquez, Willie Williams, Hany Atiyo, Courtney Fry, Zine Eddine Benmakhlouf, Pawel Glazewski, and Max Alexander.

Jones’ chances of beating the hard hitting southpaw Lebedev are very small. Lebedev appears to be still at the top of his game, but Jones clearly has slipped a lot from the fighter that he was years ago during his prime. He’s not even the same fighter that Lebedev beat in 2011. Jones is starting to look a little heavy for the weight and not the same toned fighter he was in his youth.