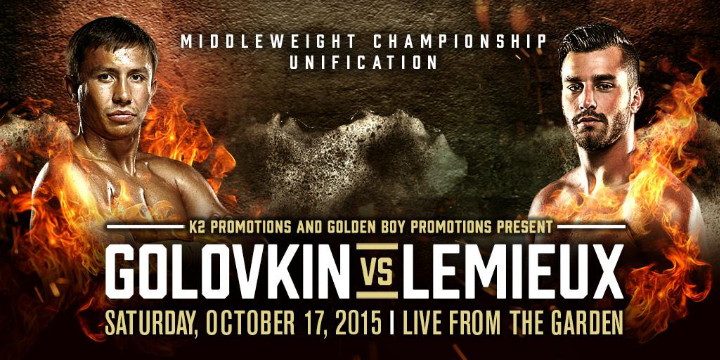 By Dan Ambrose: Tom Loeffler, the promoter for IBO/WBA middleweight champion Gennady Golovkin (33-0, 30 KOs), is reporting that 10,000 tickets have already been sold in just three days since the tickets first went on sale for the October 17th HBO pay-per-view fight at Madison Square Garden (MSG) in New York. The seating capacity for MSG is a little over 21,000 at max capacity.

With a little over two months to go before the fight on 10/17, the chances are very high that the remaining 11,000 tickets will be sold by the tiume the fight takes place.

“Maybe it’s just good fights at reasonable prices, not rocket science, over 10K tickets now sold in under 3 days,” Loeffler of K2 Promotions said on his Twitter on Thursday.

Even WBC middleweight champion Miguel Cotto, who has a ton of boxing fans in the New York area, wasn’t able to sell tickets at this rate for his rematch against Antonio Margarito in 2011 at MSG. The Cotto-Margarito 2 fight sold out MSG with a little over 21,000 tickets sold, but the tickets didn’t move like they’re moving for this fight. It’s pretty incredible the way the tickets are being sold for the Golovkin vs. Lemieux fight.

One of the reasons for the high volume of tickets being sold for the Golovkin-Lemieux fight is the price of the tickets. Half of the tickets on sale are reportedly $50 tickets. It stands to reason if you make the tickets affordable for families, then they’re going to purchase them in high numbers.

$50 tickets are a great deal for boxing fans for a fight of this nature. When you compare the product that the fans will be getting with the Golovkin vs. Lemieux unification fight to the highly overpriced tickets for the Floyd Mayweather Jr. vs. Manny Pacquiao fight earlier this year on May 2nd at the MGM Grand in Las Vegas, Nevada, it seems like a much better deal for the boxing fans in getting tickets for the Golovkin-Lemieux fight. It’s a fight that promises exciting nonstop action from start to finish, and the best thing about it is the fans aren’t being asked to pay $10K+ for tickets.

Golovkin and Lemieux will be looking to impress the boxing fans at MSG and on HBO PPV. There’s going to be a lot of fans watching this fight, and it’s going to give both of them an opportunity to show what they can do. Both guys have huge punching power, and both of them aren’t accustomed to their fights going the full distance.

Occasionally, they go the full 12 rounds to get their wins, but it’s still very rare for them to have to go that far into a fight. Golovkin recently was taken 11 rounds by Britain’s Martin Murray before Golovkin stopped him in the 11th, but Murray was just trying to survive rather than win the fight. He was running around the ring, holding constantly, and not even putting in a token effort to try and win the fight.

It was really disappointing to watch if you’re a fan of boxing because Murray looked like he was just trying to stall out the fight to keep from getting knocked out. Lemieux recently went the full 12 round distance against former WBO middleweight champion Hassan N’Dam in beating him by a one-sided 12 round decision. Lemieux knocked N’Dam down four times in the fight.

The only bet that they won’t have is the WBO title which is currently held by Andy Lee. If Lee loses his WBO title to No.1 WBO challenger Billy Joe Saunders in their fight in October, then Golovkin will have little chance of fighting for the WBO title, because Saunders recently said he has no interest in fighting Golovkin. Saunders might feel differently if Lemieux emerges victorious against Golovkin because Lemieux has the kind of fighting style that Saunders would potentially do well against.

Lemieux has been knocking out almost everyone he’s faced since he suffered back to back defeats at the hands of Marco Antonio Rubio and Joachim Alicine in 2011. Lemieux has improved his game and looked sensational in beating guys like Gabriel Rosado and Fernando Guerrero. What was really impressive was looking at how Lemieux was able to drop N’Dam four times in their recent fight, because N’Dam is a very good fighter. Before Lemieux started showing stamina problems in the last six rounds of the fight, he was really dominating N’Dam and looking powerful.

Golovkin recently smashed Willie Monroe Jr. in six rounds. Golovkin also destroyed Marco Antonio Rubio in 2 rounds, Martin Murray and Daniel Geale. The win over Monroe impressive because it looked like Golovkin deliberay carried Monroe to get more rounds in. Golovkin dropped Monroe in the 2nd round with a hard left hook, but then he seemed to back off and let Monroe survive until the 6th round. Golovkin wasn’t trying to KO him with every shot he threw. After the fight, Monroe felt that he had given Golovkin problems, but it looked more like a case of Golovkin getting in rounds against a guy who wasn’t in his class.

If Golovkin can destroy Lemieux like he’d done with his recent opposition, it’s going to make Golovkin even more popular with boxing fans.

« Cotto vs. Alvarez: Will Canelo´s corner be up to the task?

Macklin getting ready for “Lights out at the Plaza” »