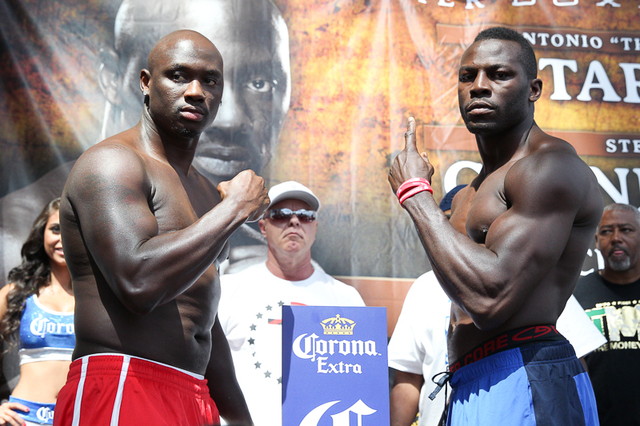 (Photo credit: Ed Diller/DiBella Entertainment) By Jim Dower: Former light heavyweight champion Antonio Tarver (31-6, 22 KOs) weighed in on Thursday for his fight at heavyweight this Friday night against former IBF cruiserweight champion Steve Cunningham (28-7, 13 KOs) in their fight on Premier Boxing Champions on Spike TV at the Prudential Center, in Newark, New Jersey. Tarver weighed in at a soft-looking 217lbs. For his part, Cunningham was a trim 204lbs, and looked more like a cruiserweight than a heavyweight.

Tarver, ##9 WBA, is hoping to get in line for a world title shot against IBF/IBO/WBA/WBO heavyweight champion Wladimir Klitschko in 2016. Cunningham, #6 IBF, is ranked a little higher than Tarver, but both of these guys are going to need to count on the 39-year-old Wladimir picking them out in a voluntary defense if they want to get a world title shot next year. Neither of them is going to get pushed up to the No.1 rankings by the IBF or WBA based on what they do in this fight on Friday night.

Tarver had a big win over Johnathon Banks in his last fight in 2014. However, Banks has been focusing his career lately on training Wladimir Klitschko and other fighters rather than on fighting. Beating Banks is a whole different kettle of fish than trying to beat a tough cookie like Cunningham. There’s a big difference in terms of what Cunningham brings to the table than Banks. Tarver is going to have to work really hard if he wants to get a win over the likes of Cunningham because this guy is going to bring it, and it’s unclear whether the 46-year-old Tarver has enough left in the tank to get a win over a decent heavyweight like this.

WBO cruiserweight champion Marco Huck (38-2-1, 26 KOs) weighed in at 199lbs for his title defense against WBO No.1 contender Krzyzstof Glowacki (24-0, 15 KOs). For his part, Glowacki weighed in at 198lbs. This fight is a mere formality for Huck, as Glowacki isn’t in the same class in terms of talent than he is.

Huck should have no problems scoring an easy knockout victory on Saturday.

Huck really needs to move up in weight at this point in his career because he can make a lot more money fighting at heavyweight than he can at cruiserweight. Granted, Huck is considered the best in the cruiserweight division, but what good is it to be the best when the money isn’t as good as what he can potentially make at heavyweight. The only problem with Huck moving up in weight to heavyweight is his lack of size. He’d be around 215-220 at the most, and would be of similar size as Alexander Povetkin.

There would be guys that Huck would struggle against like Deontay Wilder, Tyson Fury and Anthony Joshua. Without the size going for him, Huck would likely be out-boxed by the larger heavyweights in the division. However, with his punching power, he’d be a threat to beat all of them. I’m not sure that he would be able to do it.

« Macklin getting ready for “Lights out at the Plaza”