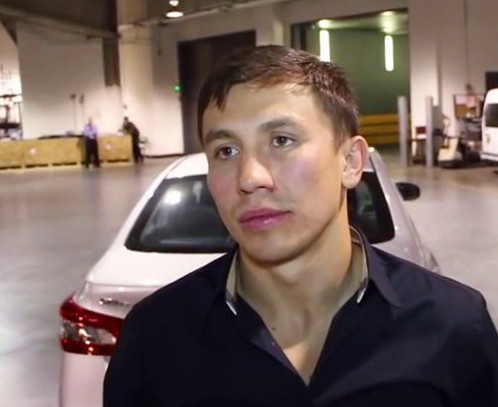 By Scott Gilfoid: In the brief war of words that were exchanged between former super middleweight strap holder Car Froch and ESPN writer Dan Rafael last weekend, Rafael appears to have gotten the better of Froch by shaming him for name dropping Gennady Golovkin’s name without committing to a fight against him.

After Rafael told Froch to keep silent about Golovkin if he’s not really interested in fighting him, Rafael finished with a Tweet saying “Calzaghe would have fought GGG.” Froch never replied to this comment from Rafael, and it’s starting to look like Froch never will.

Froch sent a tweet out over the weekend saying “Too big & too strong for GGG.” What was weird about this is Froch has had the chance to agree to a fight against Golovkin in the past month, as the Kazakhstan star is very interested in fighting him and is willing to travel to the UK to make it happen.

Unfortunately, Froch hasn’t committed to the fight, and his promoter Eddie Hearn has been saying that he doesn’t know if Froch will continue his boxing career. The tweet from Froch about Golovkin made no sense at all given Froch’s silence/failure to accept the fight with him. If Froch had followed up his tweet about being “too big & too strong for GGG” with a tweet saying he’s ready to fight him, then it wouldn’t have been bad at all. Froch would have looked like a warrior in the minds of a lot of boxing fans, but that’s not what he did.

Instead of stepping up to the table to agree to fight Golovkin and take whatever lumps that would come from the fight, Froch jumped on Rafael’s case for telling him to clam up if he’s not interested in fighting Golovkin.

Froch said “Dan Rafael, you should know as much as anyone, boxing is never that ‘simple’, so say something constructive, otherwise, silence.” In other words, Froch wanted Rafael to say positive things about him rather than him nailing him for name dropping Golovkin’s name without committing to a fight against him.

The question you have to ask Froch is why is he name dropping Golovkin’s name? Is Froch just doing it to get attention from boxing fans in order to keep his name alive? Is that it? Perhaps Froch is really interested in fighting Golovkin and is mentioning his name so that he can build up the fight more. I don’t think the fight needs to be built in this manner. Froch just needs to agree to the fight and setup a fight date with Golovkin as soon as possible for Wembley Stadium.