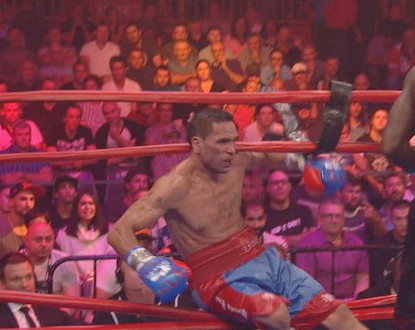 So instead of continuing with the fruitless negotiations, they’ll be going in different directions. Trout and Mundine were supposed to have fought in May, but the fight was postponed due to Mundine suffering an ear infection.

Mundine’s next option is to find an opponent that will travel to Australia to fight him over there in September. Mundine hasn’t fought at all in 2015. The last time he fought was eight months ago in November of 2014 when he defeated Sergey Rabchenko by a controversial 12 round split decision.

A lot of boxing fans felt that Rabchenko should have been given the decision in that fight, which took place in Melbourne, Australia, the home country for Mundine. If Mundine fights in September, he’ll have been out of the ring for 10 months. That’s not exactly a good thing for someone his age, and for someone who is looking for a big name like Mayweather to want to fight him.

If Mundine is to have any chance at all of fighting Mayweather, he’s going to need to fight frequently against good opposition, and preferably in the United States so that boxing fans can find out who he is. Fighting in Australia against the likes of Trout, Rabchenko and Clottey probably isn’t going to do the job. Fighting those guys in Australia might get Mundine a fight against the likes of Erislandy Lara, Demetrius Andrade, the Charlo brothers, or Cornelius Bundrage, but definitely not Mayweather.

Mundine is ranked #4 WBA, #4 WBC, #5 IBF in the junior middleweight division, and would like a fight against Floyd Mayweather Jr. However, given Mundine’s lack of a world title, his lack of name recognition and his recent 12 round unanimous decision loss to Joshua Clottey last year in 2014, it would seem very unlikely that Mundine will be getting a shot at Mayweather or any of the other big names like Miguel Cotto, Saul “Canelo” Alvarez and Manny Pacquiao.

Trout, #4 IBF, #5 WBA, #5 WBO, #6 WBC, is still trying to turn his career around since his losses to Lara and Canelo. It doesn’t look like he’s going to be able to turn things around though. In his three fights since his last defeat to Lara in December of 2013, he’s looked poor in beating Daniel Dawson, Luis Grajeda and Luis Galarza. With the way Trout looked against Dawson, it’s doubtful that he’ll ever win another world title again.

Lara, Canelo, Bundrage and Andrade would all likely have no problems beating Trout. Even when Mayweather eventually vacates his WBA and WBC junior middleweight titles, Trout isn’t likely going to win either of those titles because it’ll mean that he’ll have to beat Jermell Charlo or Jack Culcay. I can’t see him beating either of those guys. I don’t rate Jermell Charlo as high as his brother Jermall Charlo, but I still don’t see Trout being able to handle this guy. Culcay is too rugged and has too much power for Trout in my view.

« Canelo with too many advantages for Cotto to deal with