By Dan Ambrose: As expected, #5 WBO Jessie Vargas (26-1, 9 KOs) has appealed his recent 12 round unanimous decision loss at the hands of Timothy Bradley (32-1-1, 12 KOs) from June 27th to the California State Athletic Commission (CSAC) to try and have them overturn the defeat and rule it a no contest.

Vargas believes that the mistake that referee Pat Russell made in halting the fight prematurely with 7 seconds remaining in the fight resulted in him not getting the chance to KO a badly hurt Bradley.

According to Dan Rafael, the CSAC won’t evaluate the complaint by Vargas until August or September. It could take a while before his case is heard. By then, Bradley will surely be elevated to the WBO welterweight champion.

Bradley, 31, is currently the interim WBO 147lb champ after his win over Vargas. However, the World Boxing Organization stripped Floyd Mayweather Jr. of his WBO title last Monday for failing to pay the $200,000 sanctioning fee they had asked of him, and also for failing to vacate his WBA and WBC junior middleweight titles that they directed him to do. But if the CSAC rules that the Bradley-Vargas fight is a no contest, then Bradley will lose his WBO title, and the WBO will have to make a decision which move they want to make next in terms of having someone fight for the vacant WBO welterweight strap.

They could very well order a rematch between Bradley and Vargas at that point. I don’t know how well the fight would do in terms of selling tickets or bringing in good ratings for HBO. If HBO chose not to televise the rematch, which is very possible, Top Rank would then have to come up with another option to televise the fight.

Bradley had been badly hurt in the last 20 seconds of the fight from a right hand by Vargas. However, Bradley was doing a good job of surviving the rounds, and he looked to be on his way to running out the clock. Vargas only threw a couple of punches after hurting Bradley, and he wasn’t loading up on his shots the way he needed to for him to have a chance of scoring a knockout.

“Normally it’s 36 minutes for a fight, right? It was a little under that right when he was hurt, right when he was out on his feet, and all I needed was one last punch,” Vargas said at the post-fight press conference. “The referee stepped in, looked at Bradley, waved the fight, and I said, ‘I’m a new world champion, interim champion, whatever it was.’ And unfortunately, they came back to me and said, ‘Oh, no, I made a mistake. The fight’s over.’ I don’t understand how that can be. I’m gonna fight as much as I can to get this decision overruled, to get the decision to be a no contest. I think I deserve to finish what I started.”

Vargas can certainly continue to fight this, but at some point he’s going to need to move on and forget about it if the CSAC chooses not to overturn the decision. They’re obviously going to look at how well Bradley was looking at the time of the stoppage and estimate whether he would have been able to survive had the fight gone the last seven seconds. I think they’re going to rule against Vargas because Bradley looked strong enough to survive another seven seconds. 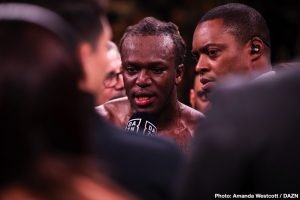