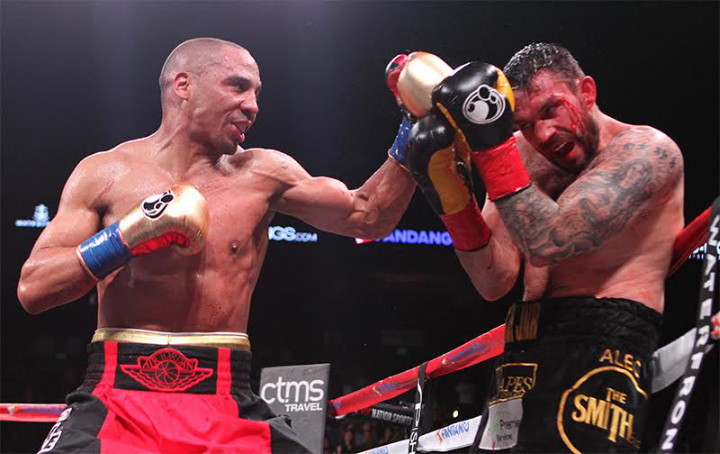 Coming off of a long 19-month layoff, Ward calmly picked the 32-year-old Smith apart with beautiful pot shots like a surgeon operating on a patient. Smith’s face was bleeding red blood from the brutal right hands, left hooks and jabs that Ward kept piercing him with in each round. It was just incredible to watch Ward’s mastery in the ring.

At the midpoint of the 9th round, Smith’s corner threw in the towel to have the one-sided slaughter stopped. The official time of the stoppage was at 1:20 of the round by referee Lou Moret. The fight, if you want to call it that, was fought at a catch-weight of 172lbs. Smith didn’t make the weight unfortunately, as he came in at 176.4 pounds at the weigh-in last Friday.

I thought the fight could have gone on a little while longer because Smith was still technically throwing shots back at Ward. Although moments earlier in the round, Ward had hurt Smith with a big right hand that caused Smith to back up against the ropes momentarily. But Smith didn’t stay there for long, as he moved out to the center of the ring for a last stand. At that point, Ward nailed Smith with a series of salvos with both hands that caused Smith’s blood to splatter all over the canvas. It was nasty to watch, I must confess. Referee Lou Moret then did the wise thing by stepping in and halting it before Ward laid Smith out.

As good as the victory was for Ward, I’m not sure that he showed that he’d be able to beat a puncher like IBF/WBA/WBO light heavyweight champion Sergey Kovalev. That’s who Ward could wind up facing in the near future if he feels confident enough to take the fight. It’s Ward’s best chance of getting a big payday in the short term if he doesn’t mind the risk involved with fighting the powerful Kovalev. They’re both about the same size at 6’0”, but Kovalev is the much bigger puncher of the two, and he’s got the better jab. Ward’s single shots wouldn’t work too well against Kovalev because he would answer back with strong punches of his own. Ward’s inside game also wouldn’t likely work because Kovalev is good at fighting in close. Personally, I think Ward should stay where it’s safe at super middleweight and forget about guys like Kovalev, Artur Beterbiev and Adonis Stevenson. Those guys hit too hard and they’re not the type of fighters you can out-box unless you have major power and/or a high work rate. Ward has neither of those things going for him. I don’t think Ward looks like the same fighter he was two years ago when he last fought in 2013 in beating Edwin Rodriguez. He’s not as explosive with his punches and his hand speed appears to be slower.