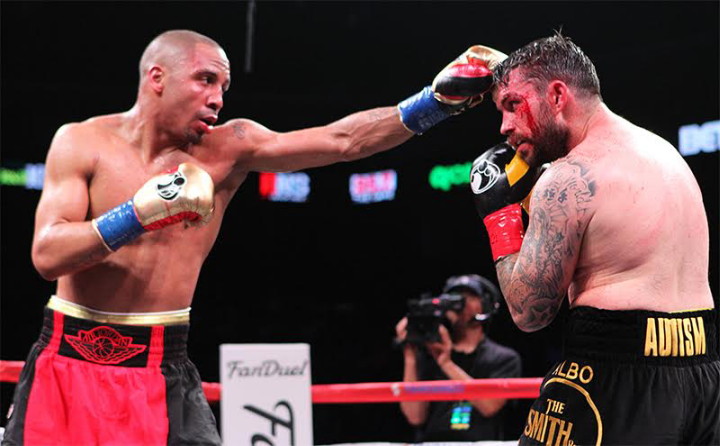 (Photo credit: Tom Hogan – Hoganphotos/Roc Nation Sports) By Scott Gilfoid: In a total mismatch, WBA super middleweight champion Andre Ward (28-0, 15 KOs) really had his way tonight in stopping an out of shape and badly outclassed Paul Smith (35-6, 20 KOs) by a 9th round stoppage at the Oracle Arena in Beautiful Oakland, California.

Ward hit Smith at will and looked like he’d never been away. Smith’ corner tossed in the white towel of surrender in the 9th round.

Smith looked huge in the ring. My guess is he was over 190lbs for the fight. He was quite a big bigger than Ward. The weight seemed to slow Smith down though because he was pacing himself all night long in plodding around the ring like an out of shape fighter. The slow way that Smith fought was a clear sign that he lacked the conditioning to fight hard. Heck, Smith only landed 47 punches in the entire fight. That’s pretty sad if you ask me.

Smith was cut over his left eye early in the fight, and the bleeding got worse as the fight progressed. In addition to that, Smith’s nose was bleeding by the 9th round, making his face look like a bloody mess. The combination of the blood from Smith’s left eye and nose had his entire face a red crimson. Each time Smith would get close to Ward, his blood would get all over the American star. It looked really bad.

Ward landed 231 of 586 punches thrown for a connect percentage of 38 percent. For his part, Smith landed just 47 punches of 266 punches for a connect percentage of 18 percent. What was surprising is that Smith rarely threw any punches. It was hard to understand because he was just taking shots like a big punching bag without throwing much in return. I mean, the smarter thing for Smith to have done would have been to go for broke by throwing as many punches as possible to have a chance of winning the fight.

In the 7th round, Smith nailed Ward with a big right hand that seemed to wobble Ward momentarily and cause him to hold on to Smith. I don’t know why Smith didn’t follow up with anything else of that kind because he had Ward where he wanted him briefly.

The fight took place at a catch-weight of 172 pounds. Smith came in over the limit at 176 pounds though, and then missed the secondary weight of 181 pounds at 11:00 a.m. today by coming in at 184 pounds. Smith wound up losing $60 thousand of his $225 thousand purse in fines. The surrender in the 9th just made complete.