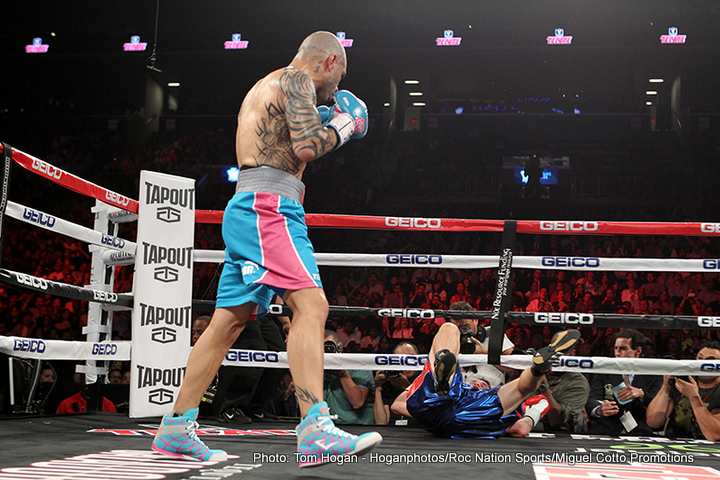 By Dan Ambrose: Trainer Freddie Roach is convinced that his fighter WBC middleweight champion Miguel Cotto (40-4, 33 KOs) has now improved enough under his tutelage to avenge his loss to Floyd Mayweather Jr. (48-0, 26 KOs) from three years ago in 2012 and give the 38-year-old Mayweather his first loss of his career.

Cotto came close to beating Mayweather in that fight, which took place at 154. But now that Cotto is fighting at middleweight, and throwing many more left hooks than he did back then, Roach thinks that Cotto is ready to defeat Mayweather.

Cotto picked up his third straight knockout last Saturday night in stopping challenger Daniel Geale (31-4, 16 KOs) in the 4th round of a 12 round scheduled bout on HBO from the Barclays Center in Brooklyn, New York.

When asked at the post-fight press conference if Cotto can beat Mayweather now, Roach said “I do. It’s obviously a tough fight. I do think Miguel is big enough and strong enough to beat him. We’d have to fight a perfect fight, but I think we’re very capable of doing that,” Roach said.

Mayweather would be very difficult for Cotto to deal with in a second fight. Mayweather made adjustments in their 2012 fight and dominated the last four rounds. This was after Mayweather stood stationary for the first eight rounds and basically fought Cotto’s fight. In a rematch, Mayweather is probably not going to want to stand and trade with Cotto given how much bigger and stronger he’s gotten since he moved up to middleweight. Mayweather would stay on the outside, pick Cotto off, and not let him land his big left hook. It would be a mismatch in my estimation.

Cotto would have to agree to fight Mayweather at junior middleweight (154) if he wanted to have any chance of that fight taking place. Mayweather would likely not be too receptive to fighting Cotto at middleweight unless he wanted to win another division world title. Cotto wasn’t weighed last night before he entered the ring so it’s unclear how much weight he put on after weighing in at 153.6 pounds during Friday’s weigh-in for the fight. Mayweather typically comes into his fights at around 150. If Cotto rehydrated to the mid-160s last night, which is possible, then Mayweather would be out-weighed by 15 pounds by Cotto.

The only way Mayweather vs. Cotto makes sense is if Cotto defeats Saul “Canelo” Alvarez in his next fight in the fall, and then chooses to bypass the Gennady Golovkin fight. The problem with that is that Golovkin is Cotto’s WBC mandatory challenger, and he’s already going to get a step aside fee for Cotto to face Canelo because he’s due his fight against Cotto.

Golovkin likely won’t agree to let Cotto have yet another fight against someone else rather than him, especially given the strong possibility that Cotto would lose to Mayweather.

It’s a potentially bad deal for Golovkin either way. If Cotto loses to Canelo, then a Golovkin-Cotto fight won’t mean as much to the boxing public. Canelo won’t fight Golovkin because his promoter Oscar De La Hoya said he doesn’t want the 24-year-old to fight Golovkin for another two years.

Golovkin impressed with Cotto, waiting for a fight against him »