Golovkin impressed with Cotto, waiting for a fight against him 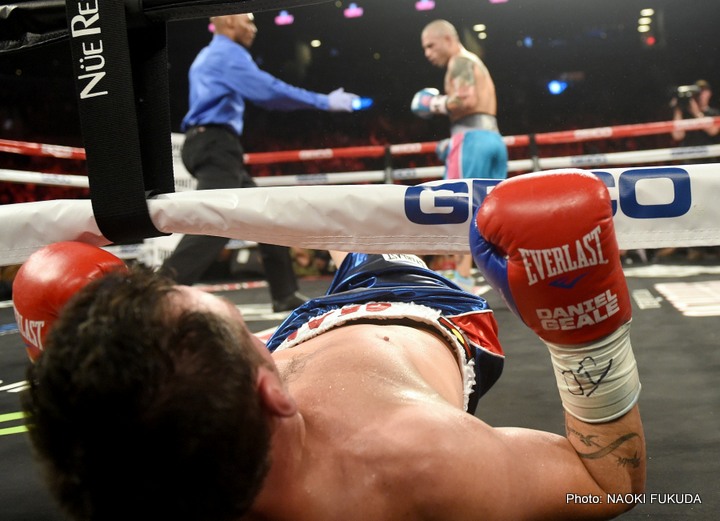 Golovkin was definitely impressed in watching Cotto dismantle Geale in stopping him in the 4th round with some big shots to the head. Golovkin says that he’s now waiting for a fight against Cotto or Saul “Canelo” Alvarez in the future. In the meantime, Golovkin says he wants a mega-fight in the UK, Germany or Russia.

Golovkin didn’t say who his opponents would be for those fights, but Carl Froch of England is one possibility.

Golovkin wants a fight against Cotto or Canelo, but the chances aren’t in Golovkin’s favor if Canelo beats Cotto in the fall. Cotto is the guy that gives Golovkin the best chance of a fight because isn’t going to take the Golovkin fight yet. He’s said as much, and his promoter Oscar De La Hoya has also made it clear that he won’t let Canelo fight Golovkin for another two years.

The 34-year-old Cotto obviously can’t take that same stance because he’s not young enough to wait out Golovkin until he’s old and harmless like De La Hoya and Canelo can.

Cotto should have been fighting Golovkin tonight instead of Geale because it’s a much bigger fight, and he’s his WBC mandatory challenger. But Cotto wanted an easier fight, and that’s why Geale was selected.

As much as you want to pour the compliments over the head of Cotto for beating Geale, the reality is he beat a C-level fighter in Geale and really didn’t prove anything with this win. Cotto still hasn’t proven that he can beat the elites in boxing, as we saw in his losses to Mayweather and Manny Pacquiao in the past.

In the past, Cotto has always looked good in being the lower level fighters from the C class the lower B-level fighters. But last night, Cotto it even easier for himself by not only picking a C-level fighter in Geame, but also insisting that he fight at a strength-draining 157lb catch-weight in order to get an advantage over him. I think Geale would have been tougher if the fight had taken place at 160 instead of 157.