Paul Smith: I’ll show Andre Ward what no one has ever done on Saturday 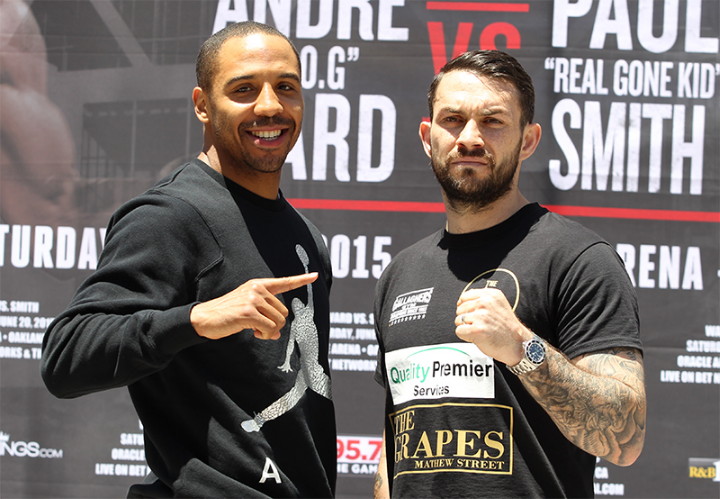 (Photo credit: PHOTO CREDIT: Tom Hogan – Hoganphotos/Roc Nation Sports) By Scott Gilfoid: Paul Smith (35-5, 20 KOs) plans on doing to WBA super middleweight champion Andre Ward (27-0, 14 KOs) what has never been done to him before when they face each other on Saturday night in their catch-weight fight at 172 pounds at the Oracle Arena in Oakland, California.

Ward, now promoted by Roc Nation Sports, won’t have his WBA 168 pound title on the line for the fight, as they’ll be fighting at light heavyweight. It’s not a big deal given that Smith won’t have to take weight off for the fight. Smith is often kind of fleshy looking, so it won’t be a problem for him to keep a little more water weight on for the fight.

With Smith saying he’s going to do something that no one has ever done to Ward before, it makes you wonder what he has up his sleeves. A lot of guys have tried to knock Ward out, guys with better power than Smith. As such, it’s difficult to imagine what Smith can do in this fight that would be any different from what other fighters have tried before against Ward and failed.

“The plan is to show him [Ward] what no one has ever done Saturday night and I’ll be giving everything I can to do that,” Smith said. “So buy your tickets and tune in and I’ll see you all on Saturday. It’s an amazing shot and chance that I have been given. You’re going to get 100%. I’m going to give it every last thing I’ve got.”

Smith has fought only two decent fighters in the past four years in fights against George Groves and Arthur Abraham, and he lost to both of them. I mean, we’re not even talking about Smith fighting anyone that’s truly good, and yet he still lost. That’s obviously not a good sign because if he can’t even beat the contender types like Abraham and Groves, then what does that tell you about Smith’s chances against a talented fighter like Ward? Yeah, I know that Abraham is technically a world champion, but I don’t rate him as a champion. I just see him as a guy that beat a paper champion in Robert Stieglitz, and has ever since been facing weak contenders and fighting Stieglitz over and over.

Smith has got to try and put everything he has into one of his punches and hope that he can knock Ward out. In Smith’s fight against Groves, he showed excellent punching power in staggering Groves him in the 1st round with a tremendous right hand. The problem is Smith’s hand was fractured from the punch, and he was taken out in the 2nd round.

Whether Smith can punch hard without breaking one of his hands is the big question. I mean, if Smith’s right hand could stay together for him to land with power like the kind he showed against Groves, I think he could give Ward a lot of problems in this fight. But I have doubts whether Smith will want to take the risk of loading up like that against Ward because the last thing he needs is to suffer another hand injury and wind up having down time with his career.

« Mayweather: I would beat Golovkin

Is Adrien Broner facing Shawn Porter at the wrong time? »