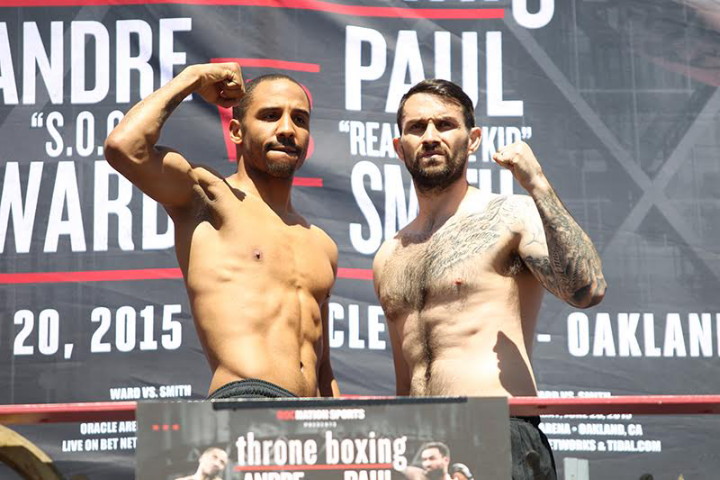 Smith came in at 184.4lbs, according to Dan Rafael of ESPN. This was 3.4lbs more than the 181lb limit that he was allowed to rehydrate to for secondary weigh-in. As such, Smith will lose an additional $15 thousand from his dwindling purse. Ward ad Smith had an agreement that they couldn’t come in over 181 for today’s 11am secondary weigh-in.

All total, Smith lost $60,000 by coming in overweight. It’s just so sad to see a fighter like Smith shooting himself in the foot by not coming in at the right weight. It makes you wonder what has the guy been eating. Better yet, what was Smith doing during training camp for him to have come into the eight a bloated 184.4?

“At a.m. weight check Paul Smith disgraced again. Deal with Ward was 181, he was 184.4. Means he gives up another $15k,” Dan Rafael said on his Twitter. “Ward didn’t have to re-weigh. Fight still on. Smith purse was $225k. Lost $45k for being over at weigh-in, then $15k today. Purse now $165k. Paul Smith’s incredible lack of professionalism should make you appreciate @DanielGeale’s total professionalism even more. #boxing.”

I totally agree with Rafael here. Where in the heck is Smith’s professionalism? How do you let yourself get so overweight for an important fight like this? I mean, this is the best fighter that Smith has ever fought before in his 12 year pro career in facing Ward, so why let himself go like this? The other top fighters that Smith has faced – Arthur Abraham, George Groves, James DeGale and Steven Bendall – were nothing compared to Ward. Ward would likely beat them all on the same night one after another if you fed them all to him in a 12 round fight.

Why wouldn’t Smith hit the right weight for a fight against a talent like Ward?
Needless to say, Ward is going to have an even easier time being Smith than he would have if he had come in on weight and in great shape. 184 is well into the cruiserweight division for Smith, but unlike the cruiserweights, he looks in bad shape.

The Ward-Smith fight will be televised on BET tonight. That’s free TV for Americans, and there should be a fairly large audience for the fight even though it’s considered a mismatch.

Hopefully, Smith can give some resistance to Ward to help him get in some rounds, because the whole point of the fight was for Ward to get the rust out due to his long time out of the ring. But it doesn’t help when your opponents comes in at 184, and looks out of shape like Smith.

Floyd Sr: I don’t want Khan to get a payday against my son »