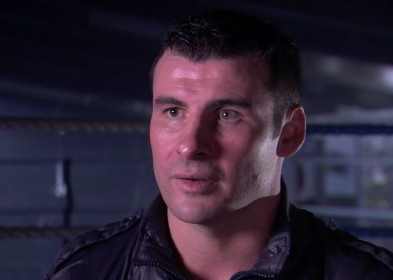 By Adam McMeeking: “Tatevosyan is a good opponent for me right now. He has fought a few good names, so if I can do a good job on him it will send out a message”, Carl Froch explained, as per Eurosport in March, 2007, attempting to justify a potential clash with super middleweight king, Ring Magazine champion, Joe Calzaghe.

Froch readily admitted that, a “good opponent” for him at this point in his career, was Tatevosyan.

Two weeks later Calzaghe completely outclassed Peter Manfredo, stopping him in three rounds in front of a crowd of 35,000 at the Millennium stadium in Cardiff, Wales – an opponent the “Pride of Wales” is often criticized for. The fact that television giant HBO insisted that Joe fight a high profile opponent, thereby injecting extra interest into a future Calzaghe-Kessler unification fight is often forgotten. Manfredo, a popular figure in America due to his stint in “The Contender” TV show fitted the bill. Robert Steiglitz and Carl Froch, did not. Manfredo, prior to his pummelling at the hands of Calzaghe, was actually rated at number ten in the Ring rankings in early 2007. Remember where Tatevosyan was ranked? Me neither.

“If I become his mandatory challenger, he will have to face me or give up the world title he has had for ten years. There should be no hiding then”, Froch boldly declared.

“Calzaghe will not be happy with himself retiring with me on his case saying he should fight me. He’s a proud man and he shouldn’t want to give up the belt to avoid fighting me. But maybe he’s looking to just make a fortune in the easiest way possible before he retires”, Froch explained, oblivious to the fact, that in eight years’ time, he too would be chasing the big-money fight, and would relinquish his title rather than face his mandatory challenger, James DeGale. At the start of 2015 Froch was dreaming of a money-spinner with former middleweight titlist Julio Caesar Chavez Junior, a man who has never won a meaningful fight above 160 pounds. Back in 2007-08 Calzaghe was targeting fights with Mikkel Kessler and Bernard Hopkins, his highest rated opposition at 168 and 175 pounds respectively. The equivalent would be if Froch was to finish up, beating Andre Ward and either Sergey Kovalev or Adonis Stevenson.

Froch continued, “There would be massive interest in it, and it would be a big one for Joe as well “.

The Cobra’s most significant win at this point in his career was his victory over Brian Magee, a fight which after ten rounds, Froch was only one point ahead on two of the judges’ scorecards.

A “big one” for Joe? In the UK, probably, but on the international stage, there were none bigger than the three opponents Joe finished his career against: the undefeated Mikkel Kessler – for the undisputed super middleweight title, Bernard Hopkins – for the lineal light heavyweight title in Las Vegas, and Roy Jones Junior – a fight with a boxing legend, albeit a faded one, at Madison Square Garden.

Froch went on to battle a long list of high quality opposition, from Jean Pascal to Lucian Bute, defeating most, and by 2013 he’d established himself as one of Britain’s biggest sporting attractions. His long rangy jab, unorthodox style, and deceptively good defence are often underrated. Kessler edged him on points in Denmark in 2010, but only former Ring Magazine champion, Andre Ward, was able to emphatically beat him. Carl has deservedly carved his place in British boxing history, as a gutsy, exciting prize-fighter, and one of Britain’s finest.

Despite multiple world titles and millions of pounds between them, it appears Calzaghe and Froch are hell-bent on remaining entwined in an endless verbal battle as to who the greater fighter was. Statistically, how do they match up?

(O) Calzaghe defeated the very best in two weight divisions, winning the lineal titles at both super middleweight and light heavyweight. Froch has not won any lineal titles, coming up short when challenging Andre Ward for the Ring belt in 2011.

(O) Froch has lost twice in his 35 fight career so far. Joe was unbeaten in 46 bouts.

(O) Calzaghe won a clear-cut points decision over an undefeated Mikkel Kessler in 2007. Froch lost to Mikkel in 2010, although did even the score three years later.

Now as to who would win a hypothetical match-up between the two, what do the experts say?

On “The Gloves are off: Super Middleweight Special” on “Ringside”, Sky Sports, in 2013:

Richie Woodhall: “I’m with Carl Froch nearly every day in the institute of sport. It’s a hard question. Joe handled every style that was put in front of him, that’s all I’m saying” – Ringside, Sky Sports, 2013.

And more recently “The Dark Destroyer” gave his opinion on the matter:

But what is the Cobra’s opinion? When reading the final quote in this article, it is worth remembering that this collection of hard punching former, reigning, or future world champions were unable to stop the Welshman: Chris Eubank, Charles Brewer, Byron Mitchell, Jeff Lacy, Sakio Bika, Mikkel Kessler, Bernard Hopkins and Roy Jones Junior.

In 2012, Froch appeared on “Ringside”, on British channel Sky Sports. Face to face with his Welsh rival, Froch gave his own verdict on how a potential fight between the two would have unravelled.

Froch: “I’m honest enough. Joe Calzaghe had a phenomenal work rate. He’s very, very tough…but, I do feel the only way I could beat him, is to knock him out. If it went the distance, the full 12 rounds, he’d do me on points…because of his work rate, and his relentlessness. You know, he puts pressure on you and he throws fast combinations, and he’s got a high, high work rate, and fitness was one of his main attributes, so, if I didn’t chin him, then, he’d probably beat me on points”.

Calzaghe: “Froch is relentless for 12 rounds, always dangerous, so you know; it would be a tough, tough fight. 100%, it would be a hard fight”.

Froch: “I’m man enough to admit that if it had gone 12 rounds, then Joe would have probably beaten me, he’d have got the nod, definitely”.

Calzaghe went on to congratulate Froch on his recent victory and presented him with his newly won IBF belt.

Froch: “This is the first time I’ve properly had hold of this belt. This means a lot, especially coming from a former IBF world champion as well. Thanks very much Joe”.

The rare humbleness, and modesty, that Carl showed during the show’s interview was refreshing. Calzaghe is widely regarded as the best and greatest 168 pound fighter in the division’s history. Froch is most certainly among the ten greatest super middleweights of all-time, possibly even the top five. There is no shame is coming second best to Calzaghe that’s for sure.

These two sporting heroes have bitterly feuded for far too long. Both should share the blame for this. Twitter swipes from Joe and threats to “fight on the cobbles” from Carl, make them appear like squabbling teenagers.

The arguing needs to cease. The mutual respect they showed for each other during this 2012 television appearance was a far more befitting representation of the talented, pugilistic warriors that they really are.

« Should Hamed be inducted into the Hall of Fame?