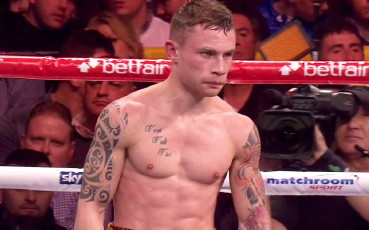 By Darmuid Sherry: When Carl Frampton enlisted Al Haymon aboard in his team as a special advisor, may people saw this as Frampton´s opportunity to not only enter the American television market, but as a step forward to be involved in some big fights in the Super Bantamweight division, and maybe in the future, the Featherweight Division as well.

What people probably wasn´t expecting was that Frampton´s debut in the USA would be in a Texan city, against a very unheralded Mexican. However, this is exactly what will happen when he takes on Alejandro Gonzalez (25-1-2) in El Paso on July 18th in the Premier Boxing Champions (PBC) Series.

After defeating Kiko Martinez in September to win the IBF belt, and immediately defending against his mandatory Chris Avalos, perhaps Frampton can be spared heavy criticism by taking, what appears to be a soft touch. Indeed, it seems that the different and new challenges that Frampton faces in this showcase, is fighting in a new country, in a new timezone, away from home where he won´t be roared on by thousands of Irish and Ulster men but instead will be in a hostile environment where most likely, the majority of the spectators will route for the challenger Gonzalez.

A Belfast fighter born and bred, it was presumed that Frampton would debut in the more traditional Irish-American heartlands, such as Boston or New York. Not only was it thought, that Frampton would appeal more to those cities retrospective fan base, but it was also geographically kinder to the Irish and British television market, that, if the fights were broadcast in those cities, viewers wouldn´t have to stay up into the early hours to watch Frampton fight. Such as what happened in James DeGale´s recent victorious travels to Boston. Instead, by fighting in Texas, the fight is unlikely to be broadcast at a sociable hour in the UK and Ireland unless the opening bell is closer to midday than midnight.

Maybe by fighting in Texas, Frampton is attempting to market himself as some sort of ´Mexican Irishman´. Indeed Gennady Golovkin is successfully marketing himself to appeal to the Mexican fans, despite being a Kazakh, principally because of his fighting style. Frampton, like Golovkin can also bring an exciting style into the ring. Also, within the Haymon stable, there is WBC Champion Leo Santa Cruz, and contender and ex-Champion Abner Mares. Furthermore, it is highly likely that the Cuban Latino and Lineal Super Bantamweight Champion, Guillermo Rigondeaux is to join Haymon and the PBC Series in September when his current managerial contract expires, as speculation suggests. Perhaps, Frampton has an opportunity to become respected within the Latino fanbase, considering many of his rivals within the Haymon stable are Latino themselves.

Coincidentally, Frampton´s great domestic rival and WBA ´Regular´ Champion Scott Quigg is also defending his trinket against twice Frampton victim, Kiko Martinez on the same night as Frampton defends in the States. Perhaps this is a deliberate ploy by Frampton´s team to either marinate a potential autumn showdown, as British fans may hope, or to not let Quigg to hog any limelight, should Quigg appear impressive against the tough Spaniard. Either way, it will only create more calls for Frampton and Quigg to finally settle their differences in the same ring together.

Or, just perhaps, Frampton just needed to fight, no matter who, where and when, and fighting Gonzalez in El Paso was the only real option on the table in the foreseeable future. Frampton is a superb fighter and at the age of 28 is coming into the prime years of his career. It is therefore hopeful that such match-ups similar to Alejandro Gonzalez are kept to a minimum, and that future clashes against Quigg, Rigondeaux or Santa Cruz are able to come to fruition. Frampton doesn´t want to see his reputation plummet as Santa Cruz´s has for fighting has-beens and never-haves, so lets hope that Frampton takes his opportunity to stamp his mark on the American market, by putting in an impressive performance, so that we can see the real super-fights of the Super Bantamweight division.

Porter: People say if I can beat Broner, I can beat Mayweather due to their similarities »