Porter: People say if I can beat Broner, I can beat Mayweather due to their similarities 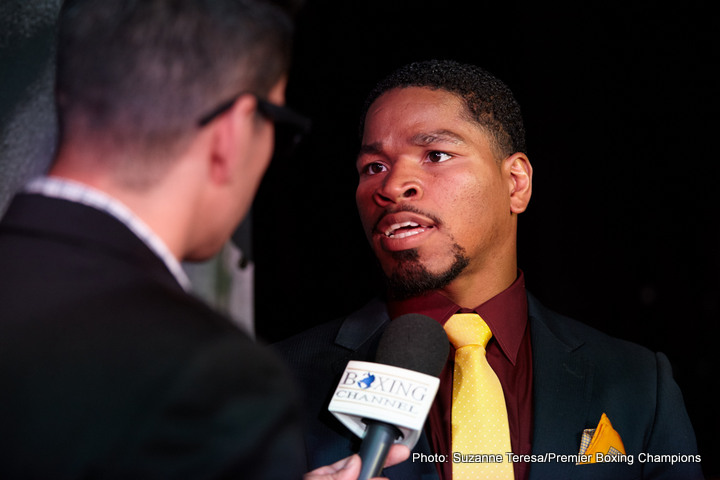 By Dan Ambrose: Former IBF welterweight champion Shawn Porter (25-1-1, 16 KOs) says that people are saying that if he defeats the Mayweather-esque Adrien Broner (30-1, 22 KOs) in their fight on June 20th, it means that he’ll also be able to defeat unbeaten Floyd Mayweather Jr. due to Broner and Mayweather having a similar fighting style.

The Broner-Porter fight will be televised on NBC Sports Net on Premier Boxing Champions from the MGM Grand in Las Vegas, Nevada.

While there are some similarities between Mayweather and Broner’s fighting style, there are still too many differences between them for Porter to assume that a win over Broner means he can also beat Mayweather. Even if Broner and Mayweather were 98 percent similar, that 2 percent difference between them would be more than enough for Mayweather to easily beat a slugger like Porter.

There are still too many rough flaws in Porter’s fighting style that need to be fixed before he could even hope to compete against a guy like Mayweather. Porter would be a poor version of Manny Pacquiao and Marcos Maidana, and Mayweather would likely have a very easy time beating Porter.

Broner might have a chance of getting the Mayweather fight if he defeats Porter, but I don’t think Porter will even be considered for a fight if he defeats Broner. Porter still doesn’t have the name recognition in the United States for Mayweather to want to fight him. Besides Porter’s lack of a name in the U.S, he’s not very good at building hype for his fights. He’s not the same kind of showman/or entertainer like Broner is, and he’s not able to market his fights in the same way as someone like Broner or even a guy like Amir Khan.

Porter still needs to develop the theatrical part of his game outside of the ring, and develop some kind of persona that he can sell to the public. Mayweather developed his character early on his career, and it obviously helped make him a star. But Porter is missing that part, and he’s going to need it for him to help sell his fights in the future if he wants to become a big star.

“Of course, that could be in my future and I’ve looked at the option,” Porter said about a Mayweather fight. “There’s a lot of similarities [between Broner and Mayweather]. That Marcos Maidana fight kind of really pushed him [Broner] to the back, you know?”

Miguel Marriaga: I have the strength and intelligence to beat Nicholas Walters »