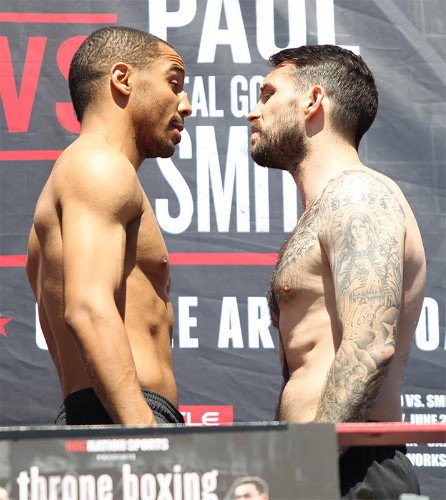 (Photo credit: Tom Hogan – Hoganphotos/Roc Nation Sports) By Scott Gilfoid: Andre Ward (27-0, 14 KOs) doesn’t know if Paul Smith (35-5, 20 KOs) intentionally came in overweight during Friday’s weigh-in or not, but he’s definitely not happy about it. Ward suspects that Smith came in overweight as a ploy to gain some kind of strategic advantage for their fight tonight at the Oracle Arena in Oakland, California.

Whatever the case, Ward sees Smith as unprofessional and he intends on whipping him bad tonight. Ward says that if the 32-year-old Smith had told him about his weight problems weeks ago, they could have increased the weight for him. But instead, Smith didn’t say anything about it and came in at 176.4lbs at the weigh-in, which was 4.4lbs over the 172lb catch-weight limit for the fight.

Ward weighed in at 171.8 and looked sensation. He looks even better at that weight than he did when he was fighting at 168.

Unfortunately for Smith, he will lose a big chunk of his purse in fines. He will be losing $45,000 of his $225,000 purse. Half of the fine will go to Ward, and the other half to the California State Athletic Commission. Additionally, there is a second weight check this morning at 11:00 a.m., and both fighters have to be 181lbs or less. For every pound that the fighters are above 181, they will lose $5 thousand. You’d like to think that Smith will be sure to make this weight, because his purse, which wasn’t a big one to begin with, has been whittled down to $180,000 after the fine.

“I’m disappointed with Paul,” Ward said to Skysports.com. “It’s very unprofessional. It makes you think, ‘is this a strategy?’ It doesn’t make me more confident – it makes me more motivated. I did my part to make the weight. He didn’t and I feel a certain way about that.”

Since Smith hasn’t shown a tendency to miss weight in his past fights, I believe it was a strategy for him to come in as heavy as possible in order to try and use it as an advantage. I mean, I think it’s a dumb strategy mind you if that’s what Smith was attempting to do, but I do believe that was the idea for him to come in so heavy. You don’t just blubber up to 176 overnight without being aware of your weight during training camp. How do you not know that you’re that far off of the weight for the fight?

I think Smith believes that if he comes into the fight well over 180 pounds, he can use the size and strength to batter Ward around the ring. But in looking at how smooth and flabby Smith looked at the weigh-in, I don’t see enough useful muscle on his frame to where the extra weight will help in the fight. Yeah, Smith has some muscle there, but he also is carrying around at least 20 pounds of fat.

If you take that useless fat off of Smith’s frame, he’s really little more than a 160lb fighter. Even if Smith comes in well over 180 tonight, which is what I expect to happen, he’ll still be a guy that is a little over 160lbs. But he’s going to have to carry that flab around on his body, and it’s going to wind up slowing him down and making him an easy target for Ward’s punches.

In the future, Ward just needs to stay away from picking Paul Smith out when he wants to do tune up fights. If Ward needs a tune-up, he needs someone that he can count on to make the weight. He doesn’t need to be fighting cruiserweights. At 176, Smith is a cruiserweight.