Mayweather-Pacquiao: Scorecards, Punch Stats and the Fight of the Century 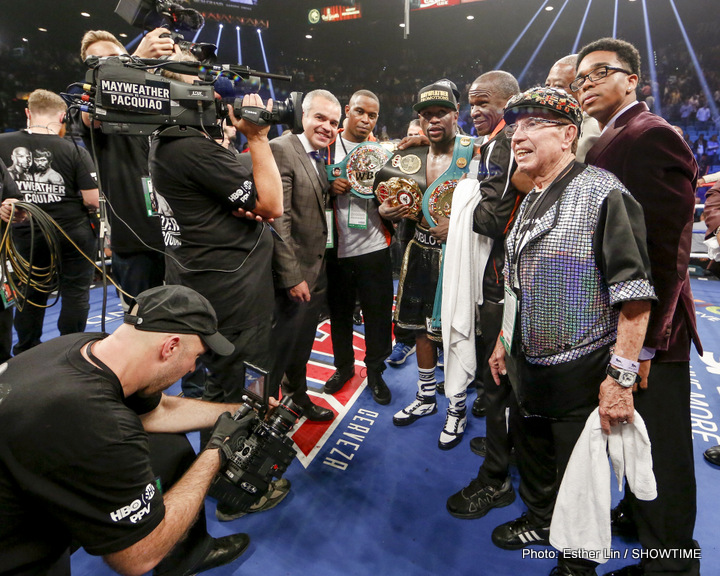 By Paddy Dwyer: In the aftermath of the richest fight in history there have been a number of observers who have sought to find a way to score the bout to Manny Pacquiao. For transparency, this writer scored the fight 117-111 in favor of Mayweather giving Pacquiao the fourth, sixth and twelfth rounds. There is an argument to give Floyd round twelve and an argument to give Manny round seven (or of course share these respective rounds). However, as a longtime observer of the sport, there was little on display to make a case for giving any more than four rounds to the man from the Philippines.

Scoring is inherently subjective and there have been a number of decisions over the years which have been hideous. There are also a number which, while not necessarily “robberies”, are contentious but one can understand the scorecard which was ultimately read out. However, the cash rich clash this weekend was not one of those fights; the decision was clear.

In light of some of the questionable articles coming to light and numerous fan opinions that a conspiracy transpired to snatch defeat from the claws of Manny’s victory, it seems timely to analyze the four kernels used to score a round and their general application to the super fight which just passed.

Let us remind ourselves of the four principles which judges use when scoring each round:

No one factor is more important than the other but each must be considered in arriving at a score for each round. To further analyze each of these and apply these principles to the fight in hand (as opposed to a round by round analysis simply to make the article more digestible):

Effective Aggression: it is acknowledged that some fighters are aggressors and some are not. However the key word here is “effective”. It is not boxing to act like Rocky Balboa and walk through an onslaught to land a punch. Nor is it effective to keep walking forward and keep missing. Effective aggression amounts a controlled approach to being the aggressor, setting the tempo, forcing the action and ensuring that the aggression used unsettles the opponent. Only in rounds 4 and 6 did Pacquiao’s aggression unsettle Mayweather. As such, for the most part of the fight, Pacquiao’s perceived aggression was not effective. I did however score round 12 to Pacquiao because while Mayweather counter punched in that round (as he did throughout the fight), Mayweather neither landed enough clean shots or pressed the action as much as in other rounds and was content to not get hit without returning much fire. While Pacquiao’s aggression in round twelve was not as effective in rounds four or six, the minimal effort coming back meant I scored round 12 in favor of the man from the Philippines largely down to his aggression (being effective or not, but being unable to score the round based on the other three kernels).

Clear Punching: A “clean” punch is one that lands flush with the knuckle of the glove against the scoring zone of the opponent (loosely being the head and torso) without being blocked. Further, while a “power” punch may be worth more than a jab, one power punch landed will not outweigh a round of jabs landed. There is a certain degree of subjectivity as to the value attributable to certain shots however many of Pacquiao’s bursts landed on arms, gloves were partially blocked or missed completely. It is difficult to argue that his shots were clean when compared with the ridiculously accurate counter punches returned by Mayweather. While the defeated former champion did land some good shots, overall, the work from the still undefeated champion was much cleaner.

Defence: this is pretty self-explanatory and it is widely acknowledged that Mayweather is a defensive genius. Credit however should also go to Pacquiao who (if the stats are relied upon) evaded 66% of Mayweather’s shots while most opponents of Floyd only manage to evade 58% of his shots. Though even the most ardent Pacquiao fan would struggle to make a case for Pacquiao’s defence being better than Mayweather’s in any round of the fight.

Ring Generalship: this is the factor on which there is little general guidance, limited resource and it becomes almost instinctive as to which fighter “feels” in control. Some are easier to judge than others. When Mike Tyson was spiraling opponents across the ring, it was easy to work out who was the “general” in the ring. Similarly, while Wladimir Klitschko’s style may not impress some, the fact that each of his fights follows the same pattern is an easy indicator of his ability to dictate the pace and distance of a fight. Mayweather against Pacquiao was similar. Only in rounds four and six was Mayweather not in control of the action. Even in round twelve which I scored to Pacquiao, the pace was set by Mayweather (but he did not do enough in round twelve to warrant winning the round). Whether or not you think Mayweather’s style is aesthetically pleasing, it is difficult to argue that he did not set the pace and tempo and dictate the manner of the fight.

Punch stats are often thrown around in boxing. However, while they are interesting they should not be relied upon as any barometer of a fight. It is no more of an indicator of a result as possession or “shots on target” in soccer. In soccer, goals set the winning team apart, anything else is useful but ultimately academic information. A better barometer in boxing is to score a fight like a judge should, in accordance with the rules of the game and in a way in which fighters should be setting up their tactics so as to give themselves the best chance of victory. Based on such criteria, it is difficult to argue anything other than for a clear and relatively wide victory for Floyd Mayweather.

Exactly as the judges on the night had it.