Canelo vs Kirkland: Quotes and Photos

Canelo Alvarez and James “Mandingo Warrior” Kirkland hosted an open-to-the-public media workout in Houston on Wednesday, May 6 at Minute Maid Park in advance of their highly anticipated clash on May 9 at Minute Maid Park and live on HBO World Championship Boxing ®. Hundreds of fans came out to the stadium to watch their favorites get in the ring ahead of Saturday’s mega-fight.

Here is what the fighters and the promoters had to say at the workout:

“I am ready to fight tomorrow if needed. I feel excited that the fight is nearly here.

“Kirkland is a strong puncher so I have been sparring with southpaws to be prepared for May 9. I am strong too and I will also look to fight intelligently on Saturday.

“I want to thank all of the fans for their support. I want them to enjoy the fight, and get to see the action in the ring they’ve been waiting for.”

“I know that I come with excitement, with what fight fans want to see. Knowing that my fans and supporters that are spending their hard earned money to come to this fight motivates me. I work just as hard as them when they are out there pushing that clock to make the money to come see the fight. 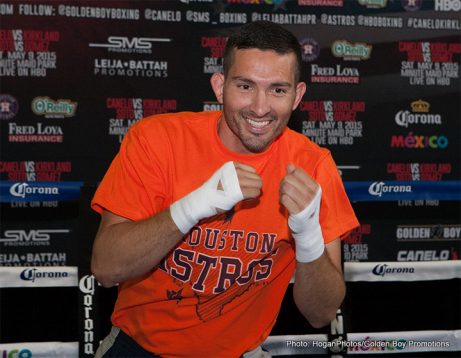 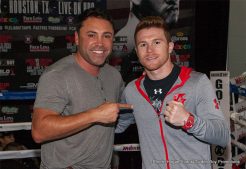 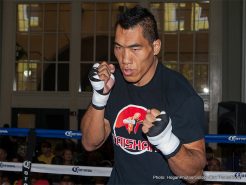 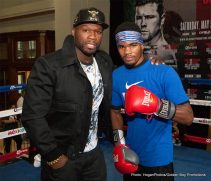 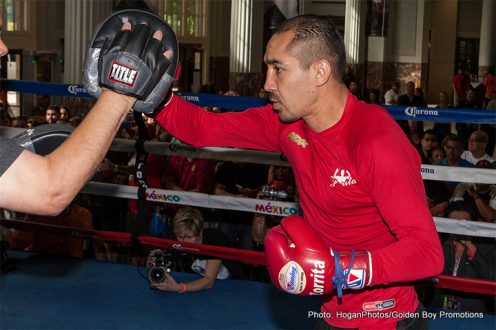 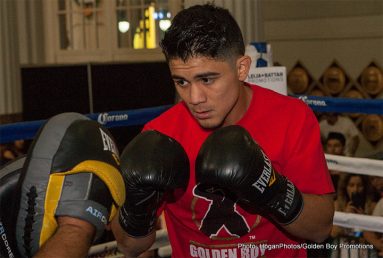 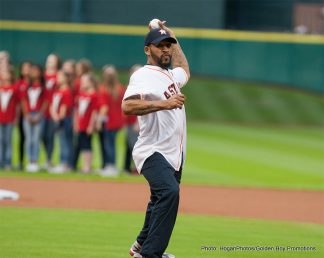 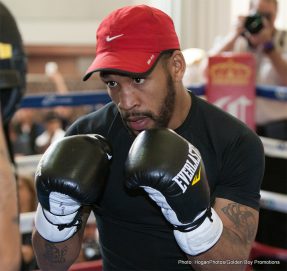 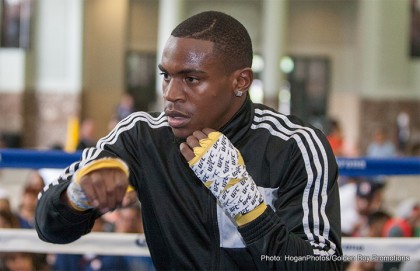 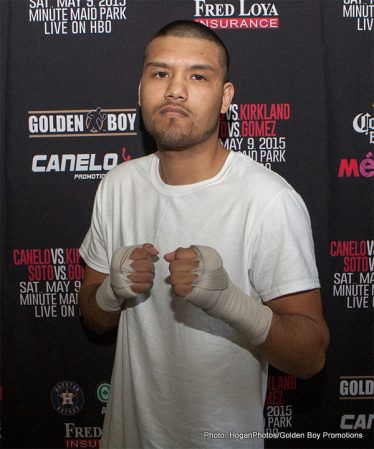 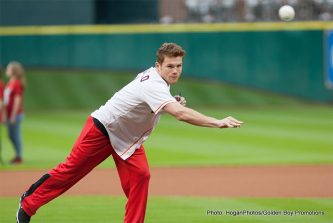 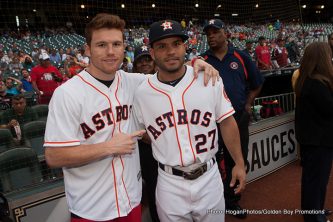 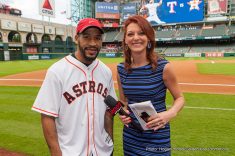 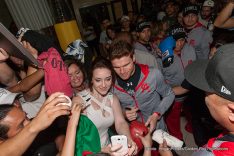 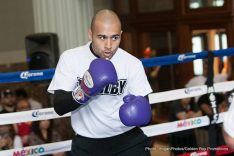 “For my training camp, I’m at a high altitude in Temoaya, Mexico, near Centro Ceremonial Otomi. The altitude is almost 5,000 meters. The oxygen is excellent; my routine starts with a run on the morning, then I take a bath before breakfast. At 2:00 p.m., I go to the gym for a couple of hours, then back to the camp, bath, rest, eat, by the evening, sometimes, we watch some movies, play cards or just talk. Sometimes it can be tedious or monotonous but I know that’s the sacrifice that we all have to make to get big rewards.

“For my bout against Gomez on May 9, I know that will be a tough fight, a difficult one. We’re working hard to get the win. I know Gomez is dangerous, but I think that my experience and the fact that I also want to be a champion again will make the difference.”

“It’s a dream come true to be on the Canelo-Kirkland undercard. This is probably the biggest stage in my life to be fighting in front of a big crowd at this point.

“I’m not scared to fight in front of a big crowd at Minute Maid Park on May 9. I fought on a stage kind of similar in the 2012 Olympics. There where tens of thousands of people there and millions of people watching me in the United States and all around the world. I just have to zone out and focus on my opponent.

“After the weigh in, I’m probably going to eat some Italian food, maybe have a lot of carbs and some protein to replenish my muscles and make sure I am hydrated to be strong for the fight.”

“Right now, I am focused on getting better in each fight, becoming victorious of course. Whether knockout or decision doesn’t matter. I feel better after each fight, and I’m staying focused and keeping my eye on the prize.

“My strategy for May 9 in the ring is to use my jab. The jab is the most important part of boxing; it’s everything.

“I’m not thinking about how big the crowd will be on May 9. It’s another stage, another fight, so I will go in and do what I need to do.”

“I am not worrying about what my opponent brings to the ring. He is going to be worried about what I bring.

“It means a lot to me to be on the Canelo-Kirkland undercard. It’s very humbling to be a part of an event like this, and I am ready for it.”

“My dad [Jesse James Leija] is behind me 100 percent. He’s my trainer and the best advice he has given me is to just relax and remain calm. No matter how big the crowd is, you tell yourself that you are just back in the gym.

“This is one of the biggest cards of the year, and I am very happy to be a part of it.

“Fans watching on May 9 can expect very skilled technical fighting from me. I am a student to the game first of all, having seen my father go through it as a professional boxer; seeing what works and what doesn’t. He’s telling me how to approach to game more scientifically rather than just going and being a brut.”

“I’m really excited and overwhelmed. I want to put on a good performance for the fans. It’s a great opportunity for every fighter on this card because it’s such a huge event.

“I’ve been jabbing in the gym with the absolute best to prepare; he’s a Cuban southpaw. I’m ready to make this a smart fight, an intelligent one.”

“I’m excited to fight on the undercard for Canelo Alvarez and James Kirkland.

“I’ve been training at a high pace so my opponent will have to fight me at a fast pace.

“This training camp, I’ve been training three times a day and eating right. I’m going to get the knockout.”

“I’ve had a good training camp. Earlier in my camp, I got two to three weeks of sparring in with Manny Pacquiao for his fight with Floyd Mayweather and it was a great experience. I picked up a lot from him. Letting your hands go and throwing more punches, switching off from fast punches to power punches and tricks in the ring.

“Fans can expect action from me on May 9. They can expect a lot of speed, a lot of power, and a lot of punches. For me and my guy, we will be going toe to toe.”

“Canelo Alvarez is ready for this fight on May 9 against the ‘Mandingo Warrior’ James Kirkland. This fight is what the fans have been waiting for: action in the ring, top fighters going for it, not afraid to fight.

“There will be no running in the ring on May 9, that’s for sure. Once that first bell rings, fans watching the action live from Minute Maid Park and on HBO World Championship Boxing won’t be able to look away until it’s over, whether by knockout or decision.”

“Outside of the Manny-Floyd fight, this really is one of the biggest fights in boxing this year. Watching it at Minute Maid Park live is a must.

“Some of that same energy that Mike Tyson had, James has. That same killer instinct is there. You have some fighters that have fighter blood for real. That’s James. That leaves it to me to find the right for him because all he wants to do is fight. James is a guy that goes headfirst at the biggest opportunity.

“I like Ann Wolfe as a trainer. But, I did see James get down in weight faster this training camp with Rick Morones and Bay Bay McClinton.”

“He has so many different styles; he is almost like a chameleon. We trained so he could do a little bit of everything in that way so when he fights in the ring, the opponent will have to try figure out how to fight five different styles.

“It’s mind-blowing to think that my son is doing something that I did for so long. It’s one of the toughest sports in the world and it’s one of the scariest things to do for a parent to see one of their kids step into. It takes a lot of guts and a lot of courage for anyone to step into those four corners.”

“James Leija Jr. will be making his professional debut on Saturday’s mega-fight he will have a platform to showcase his skills.

“Capulin, Lopez, and Hill , who were out here today, have a great fan base in Texas and are here to represent. Fans will get to see some of their favorite fighters in the ring on Saturday.

Canelo Alvarez vs. James Kirkland is a 12-round super welterweight bout presented by Golden Boy Promotions in association with Canelo Promotions, SMS Promotions and Leija*Battah Promotions. The fight will take place Saturday, May 9 at Minute Maid Park in Houston and is sponsored by Corona Extra, Mexico – Live it to Believe it!, Fred Loya Insurance and O’Reilly Auto Parts. Doors open at 11:00 a.m. CT and first bout starts at 11:10 a.m. CT, the HBO World Championship Boxing telecast begins at 9:00 p.m. ET/PT.