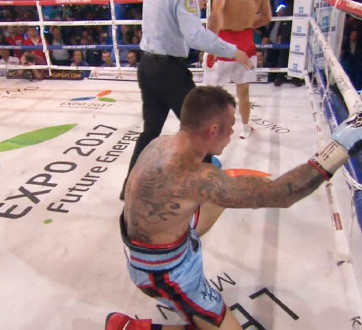 By the end of the fight, Murray’s nose was bloody and his left eye badly swollen. Golovkin had Murray’s nose bleeding in the 6th round after hitting him with a series of hard left uppercuts that sliced through Murray’s clam-shell guard. Murray was covering up constantly with his clam-shell guard, but Golovkin was nailing him repeatedly with uppercuts that came underneath and powerful body shots. It’s unclear if Murray suffered a broken nose. It’ll be interesting to know if his nose was broken from the many uppercuts he ate in the fight.

Murray looked good in the first two rounds of the fight, but that was before Golokvin turned up his game. Murray was able to land some nice jabs, right hands and body shots in the early going. However, starting in the 3rd round, Golovkin started sitting down on his punches and putting tremendous pressure on Murray. This resulted in Murray moving to get away from Golovkin and clinching him any chance he could get. The referee allowed Murray to get a way with a lot of holding in round, and he arguably should have given a warning about it. The Monte Carlo crowd booed Murray each time he attempted to grab Golovkin.

Golovkin knocked Murray down three times in the fight in dropping the British fighter twice in the 4th round and once in the 10th.

In the 11th, Golovkin trapped a bloody and battered Murray against the ropes and nailed him with a big right hand that snapped his head back causing his legs to sag.

At that point referee Luis Pabon stepped in and halted the slaughter at 2:10 of the round. For Golovkin, this was his 19th consecutive knockout which extends his KO streak to 2008.

It was hoped that Murray would fight hard and be willing to come out of his clam-shell in order to have a chance of winning the fight, but unfortunately, Murray was constantly holding and running. Before Golovkin made adjustments in the 3rd, Murray had clinched seven times in the 1st round and 11 times in the 2nd. However, Golovkin made some adjustments starting in the 3rd to move backwards each time Murray would attempt to clinch and this left the British grasping at air and looking silly.

Murray was on the defensive constantly from the 3rd round, as he tasted some of Golovkin’s power and he apparently didn’t want any more of it.

Murray was trying to get away from Golovkin in the 10th round when he was hit with a hard right to the head that put Murray down. I was frankly surprised that Murray got back to his feet because he looked like a finished fighter.

For Murray, this was the third time he fought for a world title and the third time he failed. It’s doubtful that Murray will be getting another world title shot. I think this is it for him. The only way I can see Murray getting another world title shot is if he fights the similar weak opposition that he fought to get this title shot. If Murray faces a good contender, I can see him losing and losing badly. It’s not that he’s not a good fighter. Goodness knows, Murray is a great defensive fighter, and he’s excellent clinching. But his lack of power will cause him problems if/when he faces a contender with any kind of power. The beat down that Golovkin gave Murray tonight would likely be duplicated if Murray had faced someone like David Lemieux, Marco Antonio Rubio and Tureano Johnson.

“This was my strategy in the first six rounds. This is my drama to break him down,” Golovkin said after the fight in explaining why he started slow against Murray. “I know my plan. It didn’t matter what he was doing. I hope Miguel Cotto [will fight me], because he’s the WBC champion. I need unification fight.”

Golovkin probably won’t get a fight against Miguel Cotto, because he didn’t show enough vulnerability. I think if Golovkin struggled in the fight, Cotto would take the fight in a second, but Golovkin looked too good tonight.

Saul “Canelo” Alvarez vs. James Kirkland moved to May 9th in Houston, Texas »