What makes Pacquiao the best match for Mayweather? 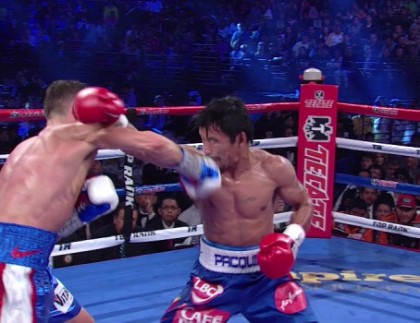 By Brickshot: Manny Pacquiao has made many appearances on mainstream media lately with his potential up and coming bout with Floyd Mayweather Jr to the announcement of his appearance as judge of the Miss Universe pageant, but what really draws many to him that makes people want to see him in the ring with Floyd Mayweather?

First, Manny has clearly proclaimed his Christian faith among the thousands of viewers on HBO’s 24/7.

While many others are afraid to show this personal side of themselves on such a high level of exposure, Manny has proudly demonstrated his love for his lord and savior Jesus Christ. This has become what makes Manny the bright light that draws a moth to a flame. His boldness in the ring has also reached the pre-fight interviews and all meetings he has had with his past upcoming opponents. It is as if his opponents cannot say a negative thing about him. Every opponent has had something great to say about him, reminding me of scripture “Even your enemies will be at peace with you.” Floyd has had a reputation of taunting and breaking down his opponents mentally. The mental battle would be a PPV battle all in itself. (In my opinion Manny wins this one too)

Secondly, Manny has rose to the top of the fighting game like no other fighter has before. The name Manny Paquiao (56-5) has been a name that most households with a boxing fan in them, or not, know very well. This man has made history by becoming the one and only boxer that has won 10 world titles in 8 weight divisions! Now what can we compare this too? Imagine yourself finally becoming the CEO at your job after being employed there for the last 10 years. Now you become so good at your position you decide to move companies and look into a bigger and more challenging one, and your focus is to become the CEO there as well. The amazing thing is that you get the position and not only do you get it,  you become great at it! Now imagine this happening 8 times.

Lastly, Floyd Mayweather Jr has self proclaimed himself as “THE BEST EVER”. I believe I am speaking on behalf of all true boxing fans when I say this,  but we cannot get past the thought of a fighter that stands alone above all other boxers in history without fighting the absolute best of his time. I completely understand,  if I were in a boxer’s shoes that wanted to finish their career undefeated  picking my opponents carefully would be the best road to take, but when a boxer says they are the best ever they better prove it.

Throughout boxing history all of the great boxers have had to travel that difficult road that has placed them into the intense conversations of  boxing fans all over the world. Whether it is sitting around the executive offices or around the BBQ pits in a back yard, the conversation will come up. Did my favorite boxer finish their career as a “Great”? Time will tell and yes, we are all waiting.

« Derry Matthews gets one over Anthony Crolla again

How many Hall of Famers has Mayweather beaten? »