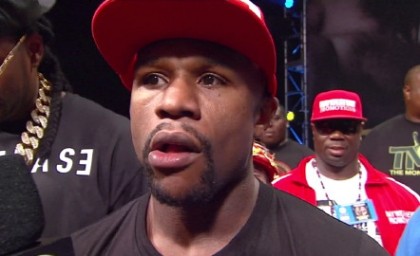 By Chris Williams: Former WBO 140lb champion Brandon Rios has no problems with the Floyd Mayweather Jr vs. Manny Pacquiao fight taking place on the Mexican holidays in 2015.

Mayweather has received a lot of high volume pay-per-view numbers when fighting on the Mexican holidays in the last three years, but it’s quite likely that he’d have received those same numbers even if he wasn’t fighting on the holidays. In other words, this could a non-issue even if Mayweather were to move off the dates. He’s so popular now that it doesn’t really matter if he fights on the Mexican holidays or not, he’s going to get a ton of fans willing to purchase his fights on Showtime pay-per-view.

“Everybody knows that Floyd had that date for many years. It’s a Mexican holiday, yes, but Mexicans will still watch it if it was Pacquiao/Floyd. Everybody can fight on that day,” Rios said via Fighthype. “It’s just a celebration; it doesn’t matter whose fighting.”

Mayweather is still being mentioned as looking to fight on May 2nd on Cinco de Mayo, and if he does face Pacquiao next, then that’s likely going to need to be part of the agreement. If Pacquiao and Arum want the Mayweather fight badly enough then they’re going to probably need to give the green light on fighting on that date. Pacquiao comes across as being open to fighting on Cinco de Mayo, but with Arum it’s not quite clear.

If the Pacquiao vs. Mayweather fight doesn’t take place due to Arum not wanting to have Pacquiao fight on a Mexican holiday then that would be a real shame. The money that Pacquiao could make in one fight against Mayweather would likely be the equivalent of him fighting three times.

At 36, I’m not sure Pacquiao can make it through three hard fights without falling apart and suffering another knockout loss like the one he experienced against Juan Manuel Marquez in 2012.

« Froch may need to fight Golovkin to get Las Vegas fight

The current state of boxing in Cuba »