Froch may need to fight Golovkin to get Las Vegas fight 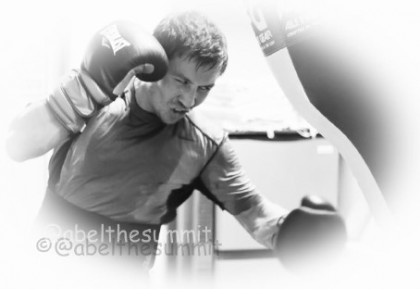 (Photo credit: Abel Sanchez:) By Scott Gilfoid: IBF/WBA super middleweight champion Carl Froch (33-2, 24 KOs) has talked repeatedly about wanting to see his name under the bright lights of Las Vegas, Nevada before he retires from boxing.

Froch was hoping that the opponent he could face in Vegas would be Julio Cesar Chavez Jr, who Froch was under the impression was someone that he could fight on pay-per-view in the United States. But now with Chavez Jr’s promoter Bob Arum saying he’s still under contract with him for one more fight, it doesn’t look like Froch is going to get the opportunity to face the Mexican star.

Since there’s no one else with a big enough name in the super middleweight division that Froch could fight on U.S pay-per-view, it puts Froch in the position to possibly give up on the idea of fighting in Vegas, or choose another opponent from a different weight class.

The fighter that I have in mind is WBA middleweight champion Gennady Golovkin (31-0, 28 KOs). He’s the biggest name that Froch could get from the middleweight division. Miguel Cotto, the WBC champion, likely won’t have any interest at all in moving up to super middleweight to fight Froch on pay-per-view.

Here’s the problem; Froch wants to fight a guy that he can beat to increase his legacy in the sport. Chavez Jr would have been perfect because he’s slow, easy to hit, and he’s rusty as anything due to him having been out of the ring since March of 2014.

Froch would have had a punching bag for him to get his big power shots off for 12 rounds. Froch may not have been able to score a knockout like he’d done against his inexperienced and limited last opponent George Groves, but he’d have a guy who would have been there for him to look good against.

Golovkin is a much different story though. He’s an active fighter with excellent power and superb defensive skills. He’s not easy to hit, and he’s very dangerous. Golovkin doesn’t have Froch’s size, but he’s got arguably better power in both hands than him.

For Froch to beat a fighter like Golovkin, he’d have to take a ton of massive shots more powerful than the right hand that Groves knocked Froch down with in their first fight. Golovkin would have the opportunity to knock Froch out and send him into retirement on a losing note rather than on a win.

I don’t know that Froch wants to risk his hide against a guy like Golovkin. However, if Froch’s dream is to still fight in Las Vegas, then Golovkin is his best and perhaps only opponent with a big enough name to potentially sellout whatever venue they fight in.

« Boxing coming to NBC in March