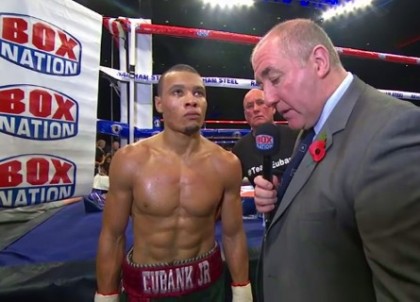 By Rav: Chris Eubank Jr lost a 12 round split decision to Billy Joe Saunders in a big grudge match for the British, European and Commonwealth titles of which we learned a great deal about Eubank Jr.

Eubank Jr hadn’t fought anyone of this level before this bout and it showed in the early rounds he looked tense and at times looked unable to counter what Saunders was doing. Eubank Jr a full team athlete showed his stamina and endurance in the middle to late rounds getting stronger while Saunders tired and started to survive.

Eubank Jr showed naivety with banking on just the uppercut and being wayward with some of his punches but hurt Saunders several times notable rounds 9 to 12. Imagine what Eubank Jr could of done throwing hooks, straight rights and mixing up the angles and also using a meaty jab of which he hardly threw. Eubank Jr neglected his body punches of which he could of thrown when hitting the uppercut.

Eubank Jr at times looked reckless and reminded me of Marcos Maidana before he joined Robert Garcia but since has improved his punches vastly.This leads me to Eubank Jr set up with his father and trainer Ronnie Davies, Eubank Jr made some comments in the build up about Ronnie Davies being the vaseline man and that Eubank Jr does’nt need to be told what to do. This was alarming and was it Eubank Jr’s way of expressing his unhappiness at having Ronnie Davies as his trainer and his techniques?

Now leading to Eubank Sr who is guiding Jr’s career and agreed to taking this fight with Saunders after his last opponent, was this naivety and poor management on Eubank Sr’s part? Surely put Eubank Jr in with a couple of British level opponents who will give him some rounds and test him before putting him in with Saunders? But you can understand Eubank Sr trusting and believing in his son but experience is vital and Eubank Jr had never experienced all the stages in the fight before.

Eubank Jr showed he has all the attributes but just needs refining by a trainer he respects and trusts as it doesn’t look like he believes in Ronnie Davies. Eubank Sr must now decide how he guides Eubank Jr’s career and must now seriously look at getting him a trainer who will bring out all Eubank Jr’s attributes and flaws as uncertainty could damage Eubank Jr and surely appease his rivals but getting a trainer who he trusts and will listen to make him an even harder opponent to beat as he showed against a fighter who will now fight for a world title he has all the tools to become a top world championship fighter even though he has so much more potential to improve and be refined.