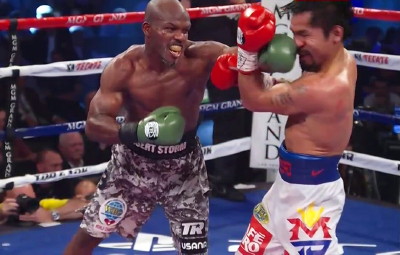 By Chris Williams: Tim Bradley (31-1, 12 KOs) tasted defeat for the first time in his career in his last fight in April of this year against Manny Pacquiao, but Bradley doesn’t believe that he’ll come up on the short end of the stick in his fight this Saturday night against Diego Chaves (23-2, 19 KOs).

Bradley believes 100 percent that he’s going to triumph over the 28-year-old Chaves and then move on to bigger and better things in the future. Bradley is helped in the fact that Chaves has never shown himself to be a particularly good fighter in the past, and that he’s just someone who is pretty much being brought in as an opponent.

The $35,000 that Chaves will be receiving for the fight compared to Bradley’s $2 million shows you how far things are slanted in Bradley’s favor. Chaves isn’t the B-side, he’s more like the C-side. Top Rank has brought a guy in that has very little chance of upsetting one of their popular draws.

They might as well have matched Bradley against Brandon Rios in a stay busy fight, because this isn’t a fight that will be competitive unless Bradley chooses to fight Chaves like he did Ruslan Provodnikov.

Well, it definitely helps when you’re being matched against a guy that you know is out of your league and who is getting $35,000 compared to your $2 million. Bradley’s a good fighter, but there are plenty of guys in the welterweight division that would give him major problems if Top Rank could make those fights.

Chaves’ best chance of winning this fight is to try and cut off the ring on Bradley and swing for the fences each time he’s near enough to land anything. Chaves doesn’t have particularly long arms, so it’s going to be imperative for him to get in punching range for him to get as much leverage as he can on his shots. Chaves needs to be ready to throw as hard as he can each time Bradley is within punching range, because he may not get that many opportunities to land his shots if Bradley chooses to box Chaves like he did Juan Manuel Marquez.

« Kell Brook a possibility for Tim Bradley in 2015

Alexander: A lot of UK fans want me to beat Khan »