Tyson Fury vs. Wladimir Klitschko possible for 2015 in summer 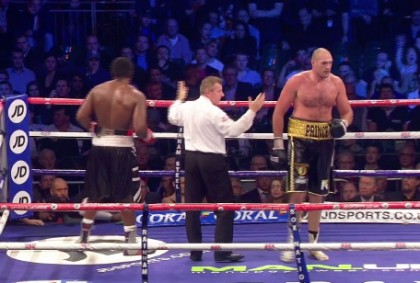 By Scott Gilfoid: British heavyweight Tyson Fury (23-0, 17 KOs) could wind up getting a world title shot against IBF/IBO/WBA/WBO heavyweight champion Wladimir Klitschko (63-3, 53 KO) by the summer of next year in 2015.

Wladimir plans on defending his title next against American Bryant Jennings in March of 2015. But after that, Fury’s management feels confident that they’ll be able to line up a fight against the 38-year-old Wladimir. Whether that will play out will depend largely on Wladimir and the WBO. If they’re willing to push the fight, then we could see Fury and Wladimir facing each other in mid-2015.

“It will happen,” British promoter Frank Warren said via the Telegraph.co.uk. “The WBO have mandated it will happen. Klitschko’s next fight is in March and after that there’s 30 days for us to negotiate with him.”

It’s probably no big deal for Wladimir whether he has to face Fury in 2015 or not, because he’s arguably a step down from his last opponent Kubrat Pulev. Fury won’t be able to sit back and beat Wladimir by backhanding him with poorly thrown jabs for 12 rounds.

If Fury chooses to fight in that manner, he’s going to get blasted apart by Wladimir. Fury’s jabs will be answered by power shots from Wladimir, and I can’t see Fury being able to handle getting hit by Wladimir’s big power shots for 12 rounds without him hitting the deck for the 10 count.

“Tyson will bring back a world title for Britain. He’s able to switch his tactics up, he’s got that much potential,” said Warren.

I’m not sure that it’ll help Fury that he’s able to switch to southpaw. He can fight for the full 12 rounds out of the southpaw stance, but that’s not going to change the fact that Wladimir is going to be bouncing big left hooks and right hands off his chin each round.

« Mayweather Jr says Pacquiao has Marquez problems so why should he fight him?