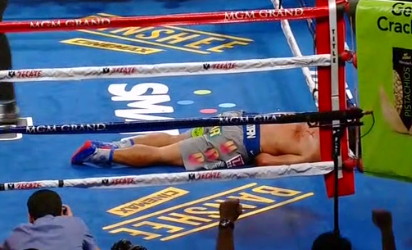 By Chris Williams: Floyd Mayweather Jr sent a message this week when he sent an Instagram message showing Pacquiao being knocked down and out by Juan Manuel Marquez from their fight in 2012.

Mayweather didn’t include any wording or verbal message with his Instagram, but it seemed pretty clear that he was sending a message that would indicate that Pacquiao still has unfinished business with the 41-year-old Marquez before he can start talking about wanting to fight him.

Pacquiao’s trainer Freddie Roach and promoter Bob Arum have been talking a great deal about a Pacquiao-Mayweather fight ever since Pacquiao defeated the made to order Chris Algieri last Saturday night in Macau, China.

If Arum and Roach are going to continue to talk up a Mayweather-Pacquiao fight, they might want to look to set up a fifth fight between Pacquiao and Marquez instead. If they’re serious about wanting to match Pacquiao up against Mayweather, then they need to do anything they can to give Pacquiao a chance to avenge the loss to Marquez, because right now I don’t believe Mayweather is going to waste time fighting Pacquiao given his recent loss to Marquez.

Pacquiao has two controversial wins and a controversial draw against Marquez. You can make a strong argument that Pacquiao was beaten in all four of his fights against Marquez. For that reason, I don’t see there being any real reason for Mayweather to fight Pacquiao. If Pacquiao isn’t good enough to beat Marquez without controversy then why should Mayweather waste his time fighting him?

« Eubank Jr looks to prove himself against Saunders tonight