Chisora-Fury 2 battle to get shot against Wladimir 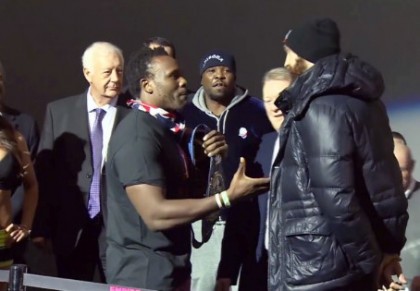 They’ll be fighting for the vacant British heavyweight strap, as well as Chisora’s EBU title. The thing that Chisora and Fury are most interested in is becoming the WBO mandatory challenger so that they can get a nice payday fight against WBO heavyweight champion Wladimir Klitschko.

Believe it or not, Chisora and Fury believe they match-up well against the 6’6” Wladimir despite the fact that neither of them have shown the kind of talent during their careers that would suggest that they can compete with him.

You can expect Fury to win this fight tonight as long as he doesn’t get brained by one of Chisora’s rabbit punches. However, I don’t expect Fury to look good in winning. I mean, he’ll win the fight, but I can see this being a really difficult bout for him because Chisora is a much different fighter than the one that Fury beat with ease three years ago in 2011 in their first fight.

Those punches make Chisora a lot more formidable opponent than previously. Of course, if the referee working tonight’s fight actually does his job by taking points off for the rabbit punches that Chisora throws, then this could be a very easy fight for Fury. Without the rabbit punches, Chisora is going to be way out of his class in this fight.

“All the work’s been done and we’re confident it will be a good fight,” trainer Peter Fury said to Skysports.com. “There are high stakes on the line but these are the kind of fights we have been after for a long time. If Tyson is going to be the world champion we know he can be, he should come through this fight comfortably.”

Eubank Jr looks to prove himself against Saunders tonight »