Marquez: Mayweather beats Pacquiao but he won’t KO him 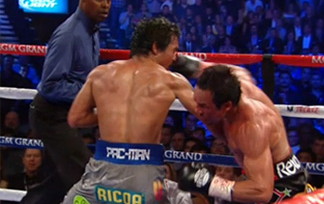 By Chris Williams: Manny Pacquiao conqueror Juan Manuel Marquez believes that Floyd Mayweather Jr would be too good for the soon to be 36-year-old Pacquiao if the two fighters wind up facing each other in 2015.

Marquez, who has faced both of them, believes that Mayweather has too much for Pacquiao to deal with if that fight gets made. However, Marquez doesn’t think that Mayweather would be able to score a knockout over Pacquiao the way that he did, because he doesn’t see Mayweather as that type of fighter.

“Floyd would win, but no knockout,” Marquez said via estoenlinia.com. “We know that defensively Mayweather is the best in the world.”

It probably doesn’t matter what Marquez feels about a potential Mayweather-Pacquiao fight, because it’s highly unlikely the fight will ever get made. Mayweather would probably take the fight if the circumstances were right, but obviously things aren’t ideal for him.

Pacquiao recently signed a 2-year extension with Top Rank, and it would probably prove to be impossible for Mayweather to setup a fight against Pacquiao. There would likely be too many things that would get in the way of the fight ever taking place.

We’ve already seen before just how difficult it is for the two fighters to try and negotiate a fight, and I don’t see that changing now, even though Pacquiao has been beaten in the last two years. Based off those defeats, Pacquiao would be lucky if he could get a 70/30 split with Mayweather. But obviously, Pacquiao and his promoter Bob Arum would be looking for a split a lot closer to 50/50 with Mayweather.

That would ultimately keep the fight from taking place, because Mayweather isn’t going to give Pacquiao a 50-50 deal based off his nothing wins over Tim Bradley, Brandon Rios and Chris Algieri.

Mayweather’s wins in the last two years have been much more significant with victories over Miguel Cotto, Robert Guerrero, Saul “Canelo” Alvarez and Marcos Maidana. Additionally, Mayweather has been bringing in bigger pay-per-view numbers than Pacquiao recently, and that in turn would strengthen his resolve to insist on getting a much bigger split of the revenue.

« Groves in for a tough time against Anthony Dirrell

Mayweather Jr says Pacquiao has Marquez problems so why should he fight him? »