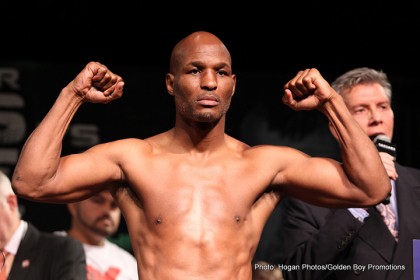 by Bob Smith: The light heavyweight championship bout between Bernard Hopkins and Sergey Kovalev is perhaps the most intriguing match-up of this boxing year. It pits a devastating knockout artist in his prime against an ageless wonder, a skilled fighter for 20 years now, who has never been knocked out even a single time in his 65 fight career. Will the power and skill of the Krusher prove to be too much for Hopkins, or with the Ageless Wonder, the Alien, somehow find a way to win, even nearly pushing 50 years old?

The first thing to ask is: should Bernard Hopkins even be in the ring with such a devastating puncher as Kovalev, much less do so at 49 years old. Hopkins is a former middleweight, and it was in this division, 15-20 years ago, that he made his greatest mark. The short answer is, yes. Hopkins went the distance against a devastating and much quicker puncher in Roy Jones Jr.; he defeated Trinidad and Oscar de la Hoya; went the distance with Calzaghe and Chad Dawson; and defeated Tavoris Cloud and Jean Pascal. While it may be true that Kovalve is a bigger puncher and man than any of them, it still shows that skill of Bernard Hopkins against world class fighters.

Having established that Kovalev and Hopkins are peers, let’s look at the strengths and weaknesses of each:

Kovalev is a devastating puncher who has knocked out all but three of his opponents, with one of these being a no contest/draw. Other than this, his KO ratio is an incredible 88.46%, which is the highest of any champion of the super middleweight division or higher. He has been unstoppable, and importantly, as champion and as his competition level increased, he still continues to win in convincing fashion. But he is not just a powerful slugger, he has an impressive amateur record, and placed very highly in the Russian national team and the World Military championships, en route to compiling an amateur record of 195-18 against the best in his nation and the world.

Despite being a good fighter, Kovalev does have weaknesses. He has never been beyond the 8th round, and he looked flustered and irritated against Caparello and Agnew. Caparello even scored a flash knockdown, while Agnew frustrated Kovalev with his movement and also landed big shots round after round. Moreover, though he did defeat Cleverly and Campillo, these fighters are B class, and he has never faced anywhere near the competition of Bernard Hopkins, much less come out on top against them. In any competitive fight, and especially against fighters with skill or movement, he relies on his power to carry the day, and he is particularly vulnerable to fighters with speed, movement, and skill in counterpunching on the inside.

Does future Hall of Fame fighter Bernard Hopkins really need an introduction for the boxing fan? No, and I will not provide one in this forum. Rather, I will review his strengths as a fighter that has enabled him to have such longevity and such impressive victories. First, he is the best ring general in the sport, save for Floyd Mayweather Jr., and perhaps Andre Ward. Second, he is the best conditioned athlete in the sport, save for Mayweather Jr., and due to his excellent eating habits, moderate training regimen, and lack of punishing fights, he is a relatively “young” 49 years old. In fact, I would argue that he is “younger” in the ring than Cotto, who is a four time champion, but has taken some savage beatings and been in tough wars. Finally, he is an excellent inside fighter, and is one of the best counterpunchers in the game, along with Juan Manuel Marquez and Mayweather Jr.

His weaknesses are obvious – he is a 49 year old man who has not knocked out an opponent in more than ten years. Also, he has never faced anyone with the power of Kovalev at any weight, much less at light heavyweight. While Roy Jones Jr. could beat B level heavyweight champions and fighters in his move up the ranks, he definitely could not compete with top tier champions. Similarly, Bernard Hopkins has struggled against top tier champions in higher weights, such as Jermain Taylor and Chad Dawson, while looking very good against B level fighters. Unfortunately for Hopkins, Kovalev is an A level fighter with excellent power.

How then will they match up?

This is a poor choice of fights for Kovalev and his manager. He is a good fighter, but not ready to face someone with the skill and talent of Bernard Hopkins at this point. Ironically, I think he has more power and more skill than Stevenson, and likely would win by knockout, but after this fight, he may never face Stevenson. Hopkins will outbox, clinch, and use movement and counterpunching to win rounds in a dirty and close fight up until rounds 6 or 7. I doubt Hopkins will be hurt by anything Kovalev throws, and instead will negate his power, which is the one major advantage of Kovalev.

Hopkins did this against the devastating punchers Pavlik and Trinidad, and Kovalev is no more skilled than they are, and though he may be a harder puncher, his skill level and experience is less than they had when they were outclassed by Hopkins. After round 7, Kovalev will begin to get desperate and careless, and this is where the fight will get interesting. He may score a flash knockdown on Hopkins after round 7, but in taking risks, he will open himself up to being knocked down or out. I think it is not unrealistic that Hopkins wins by KO or TKO in this match. Kovalev has never faced someone who will frustrate him as much as Hopkins will, and he has looked winded at times in his recent matches.

Your author has had a history of predicting upsets, and also successful defenses, so is willing to predict this one as well. Most recently, I thought that the elites of the welterweight division would be too much for Adrien Broner, and thought he would be better off at 140 pounds:

Also, so-called expert opinion aside, I resisted the hype of Canelo and knew that Mayweather would totally outclass him:

I predicted the rise of Gennady Golovkin to pound for pound star status before he faced Macklin:

And finally, though Bradley is a good, athletic fighter, I predicted he would be dominated by Pacquaio, who is a great fighter:

It is this last article and comments that got me thinking. Unfortunately, an unnamed boxing fan lost a considerable amount of money betting on Bradley, and I felt bad for the person. So, I have decided to offer a service so that other boxing fans do not experience such losses in the future, and have finally got around to staring it now.

Basically, it will be a prediction subscription service, and will only be twenty five dollars per month, with a one-time twenty five dollar initiation fee. You can direct requests to bobsmithkoboxing AT gmail dot com, and a Paypal service of automatic debit will be set up for the after fight rush.  It will be possible to cancel at any time for any reason, but if you are prone to losing when betting on boxing, this service is for you.  Detailed predictions will  be provided for major pay per view fights upon request.

This will be the last specific betting suggestion I will make on this site, though of course I will make predictions every now and then. The specific bet is that the experience and skill of Hopkins will triumph over the power of Kovalev. This bet should only take place with 20% of your betting funds, as anything can happen on a given night.

The final 30% should go to a Hopkins KO victory in one of the rounds 7,8,9, 10, or 11. When is the last time a Hall of Fame fighter has 100 to odds in his favor, if he does something that he can realistically do? Thus, 6% of your total should go on a Hopkins KO or TKO in each of these rounds. If this happens, you win six times your money.

If this is money that you feel comfortable in potentially throwing away, you can divide the money by five and bet on a KO or TKO for Hopkins in each of the rounds 7, 8, 9, 10, or 11 and if you win, make 20 times your money. That is not bad for exactly zero work, other than reading this article.

If this article did help you make money, or at least helped you to avoid losing money, let me know in the comments. I do feel comfortable with advising that the skill and technique of Hopkins will be enough to ensure that the fight goes the distance, in which case, according to my advice, you cannot lose money. And if Hopkins does pull off an upset of the hype, as very likely will happen, the reader can make 1.5 times to 6 times his money, barring an extremely unusual KO by Hopkins.

« Can Victor Ortiz rise from the ashes?