Is Nonito Donaire rushing back to the Super Bantamweight division? 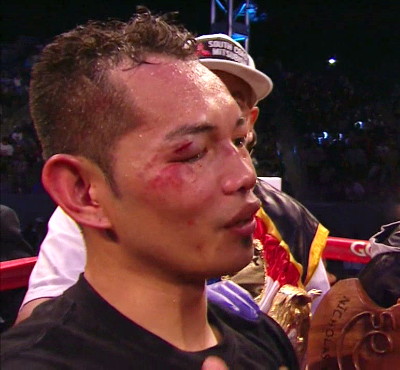 By Gerardo Granados: Last Saturday night at the StubHub Center, California, U.S.A.; undefeated Nicholas Walters W25(21)-L0-D-0 defeated Nonito Donaire W33(21)-L3-D0 by TKO6 to unify the WBA feather belt and probably not many were surprised with it. The Axe Man is a good fighter who not only possesses power in both hands; he is patient and also smart inside the ring. Donaire was supposed to be the more experienced boxer inside the ring but to me he had the wrong game plan and never adjusted failing to respect his opponent power.

Once, a young Filipino Flash took advantage of his size, height and reach to defeat flyweights and bantams. Against Vic Darchynian on his first fight Donaire did pretty much the same thing that Walters did to him.

Nonito studied Darchynian and had a smart game plan using his speed and accurate counter-punching and also timing Vik´s attack to win by KO. It seems like Nonito got used to fight against pressure fighters who left holes open to his big left counter and he forgot that at the featherweight division he is no longer the bigger lion inside that ring.

It was reported that he is considering moving back to the super bantamweight division, also his father Dodong Donaire has stated that Nonito is moving back. But to me it seems a little premature, because there must be a good reason why he decided to move up to the featherweight division in the first place. When someone relies on his size and power to defeat smaller opponents then he becomes a bully. When someone relies on his skills to dominate and defeat bigger and stronger adversaries then he becomes a great boxer.

Nonito was able to hurt Walters but failed to take advantage of his speed and mobility; he failed to prepare his big left mixing his shots to the body and head and became quite predictable for Nicholas, staying in front of him not creating or waiting for openings or even setting angles that benefited him. To me it was not a matter of lack of strength or size but simply a matter of styles and Walter´s fighting style was poison for Nonito.

If Donaire moves back to super bantam then he would be forced to fight against WBA – WBO Champion Guillermo Chacal Rigondeaux to regain fans respect, but he also could fight against WBC Leo Santa Cruz, Scott Quigg or IBF Carl Frampton; but if he stays at the featherweight division WBC Jhonny Gonzalez and IBF Evgeny Gradovich are good options too.

I think Nonito can be competitive at the featherweight division but he need to be smart and stop relying only on his big left to win. But what about the reader, do you think Donaire is rushing back to super bantam?