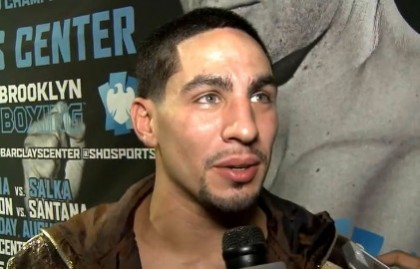 The purse bid which had been scheduled for October 20th has now been cancelled. The fight date and the venue for the Garcia-Postol fight still have yet to be determined at this time.

It’s surprising that Garcia, 26, has decided to take the Postol fight because Garcia had been talking about wanting to move up to 147 to take on the big names like Manny Pacquiao and Floyd Mayweather Jr.

The fact that Garcia has chosen to stay at welterweight at least for now suggests that he or his father Angel Garcia may have some misgivings about moving up to the 147 pound division to mix it up against the bigger fighters in that weight class.

It could be that Garcia has sparred with some good welterweights and discovered that he doesn’t dominate them like he’s dominated the smaller light welterweights. As bad as Garcia looked against Mauricio Herrera recently, Garcia is probably better off staying at 140 and making the best of it.

As long as he stays away from Herrera, he might be okay. Garcia has already ruled out fighting Lucas Matthysse again, and he doesn’t seem interested in fighting Herrera again either.

Postol, 5’11”, is a nonstop punching machine with an excellent jab and a very high work rate. He looked very impressive in his recent stoppage win over Selcuk Aydin from last May. Postol stopped Aydin in the 11th round.

Here’s the press release from the WBC:

The WBC is very happy to announce the cancellation of the purse bid for the fight between WBC/WBA super lightweight world champion Danny “Swift” Garcia of the United States and WBC mandatory challenger Viktor Postol of Ukraine. Both parties have reached an agreement, the specific details of which will be announced in the near future.

WBC President Mauricio Sulaiman said, “I am extremely satisfied with the good faith agreement reached by the parties involved which will generate very good opportunities for the fighters, which is the top priority for all of us involved in this great sport.”

« Saunders: I’ll retire from boxing if I lose to Chris Eubank Jr