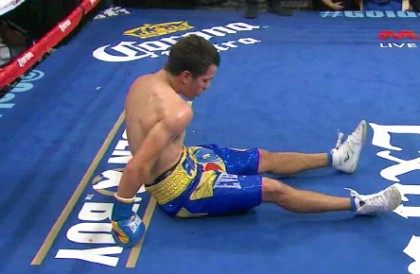 Castellanos, 32, knocked Rios down in the 2nd round. In the 5th, Castellanos hurt Rios with a right hand to the head. Castellanos unloaded with a flurry of shots until Rios turned his back on him, causing the referee Ray Corona to halt the fight at 0:11 of the 5th.

The fight was competitive during the first minute of the first round, but after that it was totally one-sided with the quicker, stronger and taller Castellanos battering Rios at will with punches. Castellanos was cut on the side of his left eye in the 1st round, but the cut wasn’t a factor in the fight. Castellanos fought well and would have likely been able to beat Rios even with one eye last night.

Rios came into the fight undefeated with wins over guys like Rico Ramos and Andrew Cancio. Obviously, Rios wasn’t ready for a guys as talented as Castellanos because this fight was a real mismatch.

Castellanos had lost his previous fight to Rene Alvarado by a 9th round knockout last February.

In undercard action, unbeaten light welterweight Antonio Orozco (21-0, 15 KOs) defeated 37-year-old former WBC super featherweight champion Steve Forbes (35-14, 11 KOs) by an 8 round unanimous decision. Forbes came into the fight having lost 10 out of his last 13 fights. The final judges’ scores were 80-72, 80-72 and 80-72. Orozco, 26, looked decent but not someone that would give the better fighters in the 140 pound division any problems like Lucas Matthysse. Orozco crowded Forbes constantly, nailing him with body and head shots and backing him up against the ropes. With no worries in terms of power shots coming back at him, Orozco was able to dominate the fight.

Undefeated featherweight prospect Diego De La Hoya (7-0, 5 KOs) defeated Luis Ruiz (5-3-1, 2 KOs) by a 6 round unanimous decision. The fight was competitive for the first two rounds as Ruiz surprisingly was able to back up De La Hoya and nail him with shots. But by the 3rd round, Ruiz was bleeding from the nose and just looking like he wanted to survive.
The final judges’ scores were 60-54, 60-54 and 60-54.