Khan: Kell Brook will always be there; I want Mayweather! 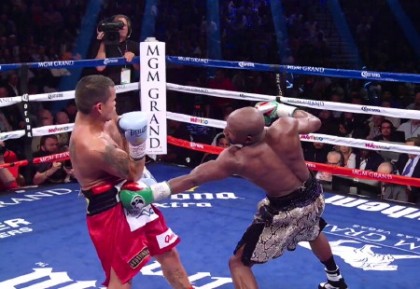 Khan says that he only has once opportunity to fight Mayweather in 2015 and that’s in May. If Khan doesn’t take the fight against Mayweather at that time, then he’ll need to wait until 2016. Since Mayweather plans on retiring at the end of 2015, it looks like Khan will be permanently out of luck in trying to get the Mayweather fight.

If Mayweather does come back for a final fight in 2016, in order to capture his 50th win of his career, he sure as heck won’t be looking to fight Khan for that final fight. The money in a Mayweather-Khan fight is nothing compared to the good clean cash that Mayweather could make for a fight against the likes of Miguel Cotto, Manny Pacquiao or Saul “Canelo” Alvarez. Mayweather will be looking to maximize his profits in his last fight, and a fight against Khan won’t even be an option.

“I want to fight Floyd Mayweather and I want to promote England,” Khan said to esnewsreporting.com. “It would be great for the country and for the people. Kell Brook will always be there. He’s young. But Mayweather’s not always going to be there and that’s why I really want that fight. It has nothing to do with money. It’s because I really believe I can win that fight.”

I think Khan should look to take the fight against Brook in early 2015 and stop wasting time trying to get a fight against Mayweather. I don’t see Mayweather wanting to fight a guy that doesn’t bring in the money like Khan. Also, with the way that Khan holds, shoves, pulls down on his opponent’s heads and runs now, I don’t see him as having the style that Mayweather would want to fight.

The last thing Mayweather wants is to be fighting someone who is going to be holding him 24/7 the way that Khan was holding his last opponent Luis Collazo last May.

So Khan is interested in fighting Mayweather just for the chance at fame and not for money? Gee, that’s interesting. I’m sure Mayweather will be glad to know that, because then he can offer Khan a smaller cut than he might otherwise have had. If it’s nothing to do with money, then why isn’t Khan fighting Keith Thurman? If it’s only about the accomplishment, then Thurman is about as high as Khan can go outside of a fight against Mayweather or Manny Pacquiao. If money isn’t what Khan is after then he should tell his adviser Al Haymon to schedule a fight against Thurman, because that’s a fight that would further Khan’s legacy.

“It’s the last chance. It’s up to you [the media] to promote this, man,” Khan said. “I know my style is going to give Floyd Mayweather the biggest problems, and you can see Floyd slowing down. No disrespect to him. He’s one of the best fighters ever.”

I get the impression that Khan isn’t too fond of the idea of fighting Brook. To be sure, a loss to Brook would be a huge blow for Khan in the UK. He’s lost to guys from the United States and Colombia, but Khan has never been beaten by a British fighter before. If Khan loses to Brook, it’ll be a tough pill for him to swallow because he won’t be perceived as the king of the hill in the UK at 147.