Dirrell: Groves doesn’t deserve a shot at my title 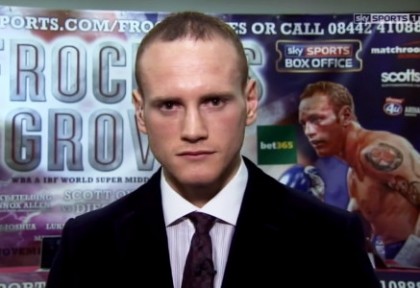 The winner of the Groves-Rebrasse fight will become the mandatory challenger for Dirrell’s WBC belt. Dirrell doesn’t see Groves as a deserving challenger because of his two consecutive knockout losses to IBF/WBA super middleweight champion Carl Froch in his last two fights.

The World Boxing Council for some odd reason chose to let Groves, a fighter with knockout losses in his last two fights, to fight in a WBC 168 pound eliminator bout against Rebrasse. Dirrell obviously doesn’t agree with the WBC’s decision making to allow a fighter with back to back stoppage losses to be fighting in an eliminator. Further, Dirrell sees Rebrasse as not a good fighter. He doesn’t rate him.

Up until recently, Rebrasse had fought largely weak opposition in France. But he was able to pull off an upset of contender Mouhamed Ali Ndiaye recently in stopping him in the 4th round, and that got Rebrasse ranked high by the WBC. There are arguably much, much better contenders than Ndiaye in the super middleweight division, but it doesn’t matter. Once Rebrasse beat Ndiaye, he was suddenly ranked high by the WBC.

The WBC chose to keep Groves ranked high despite his knockout losses to Froch, and they felt that Groves rated to be fighting in an eliminator rather than somebody who was actually winning his fights. It doesn’t look like Dirrell is too happy about the prospects of him potentially fighting a guy having lost 2 out of his last 3 fights in Groves, if he gets past France’s Rebrasse this Saturday night.

If Dirrell chooses not to fight Groves, then the WBC will strip him of his title and either have Groves fight for the vacant belt against the next highest ranked contender or they may even just give Groves the title. I think in this case the WBC might give Groves the WBC belt outside of the ring if Dirrell vacates; not that he could vacate, mind you. There’s little chance that Dirrell would ever vacate his title due to him having to fight a guy who he doesn’t see as being a worthy challenger.

Dirrell says he has no interest at all in fighting in the UK, so if Groves does beat Rebrasse, he’s going to likely need to come to the United States for the fight against Dirrell to take place. Dirrell says he doesn’t want to fight in the UK because of what happened to his brother Andre Dirrell, who fought Froch in Nottingham in 2009 and was arguably robbed.

Mayweather uses movement to defeat Maidana; is Pacquiao next? »