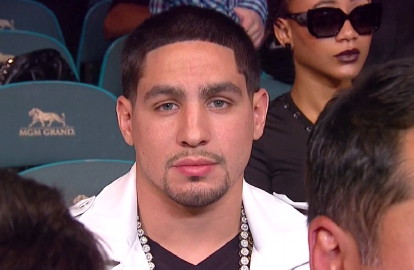 Garcia attended the Mayweather vs. Marcos Maidana fight last Saturday night, and after the fight he told the media that he wants to move up in weight to fight Pacquiao or Mayweather. He thinks he can compete with both of them.

If Garcia doesn’t move up then he’s going to be forced to take on a really dangerous opponent in #1 WBC Viktor Postol, and that’s a fight that Garcia may not win. We saw Garcia win a controversial 12 round decision over Mauricio Herrera last March in a fight that many boxing fans saw him losing.

Rather than giving Herrera a rematch or a rematch against Lucas Matthysse, Garcia was pulled way backwards and put in with a soft touch in Rod Salka. Since Garcia can’t continue to fight Salka type fighters, he’s either going to need to move up in weight to try and get a big money fight against Mayweather or Pacquiao quickly or he’s going to need to fight Postol.

You can see why Garcia is now interested in going after the money, because the risk is too high for him to stay at 140. And if Garcia doesn’t get the fight against Pacquiao or Mayweather soon after arriving at 147, he could lose to someone like Keith Thurman or Devon Alexander. There will be a ton of pressure on Garcia to face quality opposition when he moves up to 147. He can’t just play it like Amir Khan in facing weak opposition hoping the Mayweather fight will fall into his lap.

Floyd Mayweather, Manny Pacquiao,” Garcia said to esnewsreporting.com when asked who he would like to fight. “I’m looking for bigger fights than him [Lucas Matthysse]. I think that’s a great fight for me, Manny Pacquiao. I’m bigger than him. I’m strong. I’m a counter puncher. I’m young and I’m in my prime. Be careful what you wish for. After I beat him, I want to take credit. Yeah, I’m definitely going to 147. I’m looking for big fights.”

Garcia will have major problems if he gets in the ring with either Pacquiao or Mayweather, because he doesn’t have the same kinds of skills as them. Garcia is more of a Maurico Herrera type talent, and not even at that level. That’s why he needs to cash out as quickly as he can in fights against Pacquiao or Mayweather, because he’s going to lose if he fights anyone good in my view.

When asked how he’d fight Mayweather, Garcia said “I’d just have to beat him to the punch, man. Use my jab, fire when he fires, find a way like I always find a way.”
I would favor Marcos Maidana to defeat Garcia, and I don’t see Garcia being able to compete with either Mayweather or Pacquiao.

Is Adonis Stevenson wasting his career? »