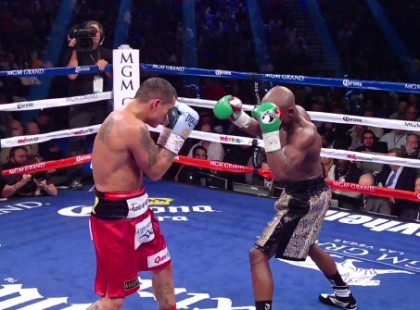 By Chris Williams: It’s only been 2 days since WBA/WBC welterweight champion Floyd Mayweather Jr (47-0, 26 Kos) did a number on Marcos Maidana (35-5, 31 KOs) in putting on a masterful performance in beating the Argentinian for a second time in winning a 12 round unanimous decision at the MGM Grand in Las Vegas, Nevada.

Already boxing fans and the media are pressing Mayweather to have him pick out his next opponent for his May fight in 2015. Mayweather says he’s not going to be rushed into a hasty decision, because he’s the A-side and he wants to take it easy and enjoy his family.

When he does decide on an opponent, you can believe it’ll be someone what he’s painstakingly studied to make sure he’s the guy boxing fans want to see him fight.

“I want to enjoy my time off. We don’t know who we going to be fighting. We are not in a rush. We are the A side and we are going to take our time,” Mayweather said.

Fans have been throwing Manny Pacquiao and Amir Khan’s name at Mayweather ever since the post-fight interview and press conference, but Mayweather says he’s not sure whether he’ll fight either of those guys. He says he’s not thinking about a fight against Pacquiao right now. Besides, Pacquiao has a tough test in front of him in Chris Algieri that he need to get by on November 22nd before he can start considering him as a potential opponent. There’s no telling what will happen in that fight because Algieri is a tough opponent and Pacquiao is starting to show his age at 35.

“I never think about Pacquiao. That’s not my focus. I could care less what Pacquiao does. If it happens, it happens,” Mayweather said.

The 2nd thing that Pacquiao will need to say yes to is fighting on Showtime pay-per-view instead of HBO, the network that he’s been fighting on. If Pacquiao can’t agree to either of those things or if his promoter Bob Arum of Top Rank doesn’t say yes to those requests, then there likely won’t be a Mayweather vs. Pacquiao fight.