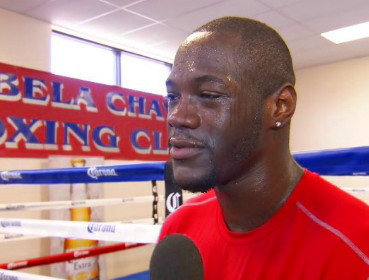 By Scott Gilfoid: American heavyweight talent Deontay Wilder (31-0, 31 KOs) foresees himself meeting up with British heavyweight Tyson Fury (22-0, 16 KOs) next year in a fight that Wilder believes will be a huge fight that would make promoters unnecessary.

Presumably, Wilder believes that Fury will win his next fight against Dereck Chisora on November 22nd, and then beat IBF/IBO/WBA/WBO heavyweight champion Wladimir Klitschko after that. The Fury-Chisora fight is a WBO heavyweight eliminator bout with the winner becoming Wladimir’s WBO mandatory challenger.

It’s not likely that Fury would risk the payday bout against Wladimir to take on arguably the most dangerous heavyweight in the division in the 6’7” Wilder. So we’re basically looking at the Wilder-Fury fight hinging on Fury being able to beat Chisora and Wladimir.

“I think you know the guy I want to fight [Tyson Fury],” Wilder said to Skysports.com. “I don’t think we even need a promoter for this fight. Everybody wants to see this fight. We don’t even need to sell this fight. All that needs to happen is a date and a time and a location. I think definitely next year that’s going to happen.”

Unfortunately, the only way I see a Fury-Wilder fight happening next year is if Deontay takes mercy on Fury and gives him a title shot after he gets knocked out by Wladimir at some point. I’m not even sure Wladimir will fight Fury in 2015. Wladimir may string it out until 2016. If Fury beats Chisora to win their WBO heavyweight eliminator bout, I still see Fury sitting around and waiting for at least a year or more before Wladimir fights him.

Look at Kubrat Pulev. He had to wait a year after winning his IBF heavyweight eliminator bout, and I see the same thing happening to Fury. What we can expect from Fury is for him to take on a bunch of soft jobs until he gets his title shot with Wladimir in either late 2015 or in the first half of 2016. Fury is likely going to be using up basically a year and a half of his career waiting on the Wladimir fight.

Deontay is expected by many boxing fans to win the WBC heavyweight title this year against Bermane Stiverne. Once Wilder has the belt, Fury will need to make a decision about whether it’s more profitable to face Wilder or wait perhaps a year or more before Wladimir finally gets around to fight him. Believe me, it could be a very, very long wait for Fury before Wladimir gives him the time a day.

As far as a fight between Fury and Wilder goes, it really wouldn’t be much of a fight because Fury is too easy to hit and too chinny for him to make it past the first 4 rounds. The shot that Steven Cunningham dropped Fury with last year in their fight in April of 2013, it would be amplified with Deontay’s power and there would be no getting up from the shot.

Wilder is fighting this Saturday night against journeyman Jason Gavern at the StubHub Center in Carson, California. Wilder will be looking to show off his stuff in this fight and put the heavyweight world on notice that he’s coming to take over the division.

« Golovkin ahead of Chavez Jr in Froch Facebook poll