Can Sergio Martinez turn his career around? 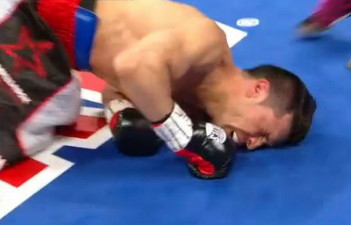 By Dan Ambrose: 39-year-old former two division world champion Sergio Martinez (51-3-2, 28 KOs) is coming off of his worst defeat of his career in losing to Miguel Cotto by a 10th round stoppage last June.

It was a real beat down for Martinez with him getting knocked down three times in the 1st round, receiving a count in round 9th, and stopped in the 10th by his corner. Martinez says he wants to continue fighting, and he plans on having a full medical exam in New York next month to make sure that there’s nothing that might physically get in the way of him continuing his career.

Even if the exam shows nothing wrong with Martinez’s health, he still faces a tough climb back to the top.

Martinez didn’t just start looking shot in the Cotto fight. He looked that way last year when he fought Martin Murray in April of 2013. Murray is a good fighter, but quality guys like Gennady Golovkin, Sam Soliman and Peter Quillin would beat him a lot easier than Martinez did.

Former IBF/WBA middleweight champion Felix Sturm is interested in fighting Martinez next. That’s a fight that Martinez likely would have had no problems winning when he was younger and still in his prime, but right now it’s difficult to say whether he has enough left in the tank to beat Sturm.

The thing is Sturm has seen better days as well, because he’s lost two recent fights against Soliman. If Martinez’s promoter Lou Dibella lets Martinez fight Sturm, he might wind up being sorry for it when/if Martinez gets beaten up and stopped like he was against Cotto.

Unless Martinez wants to go after Soliman or wait out Cotto until he vacates, gets stripped or suffers a defeat, he really should think about maybe calling it a day to keep himself from taking needless beatings by the other top fighters in the division. Martinez’s surgically repaired right knee still doesn’t look strong after a year of him rehabbing it. If he hasn’t built up the strength in the knee year, then you’ve got to figure it’ll never come back.

« Mayweather and Maidana heading towards showdown on September 13th

Appreciating Underrated Fighters of the Past »