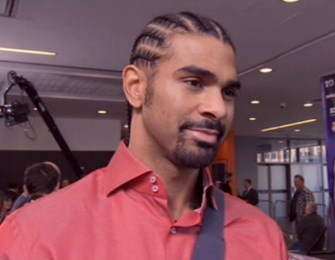 By Scott Gilfoid: Former WBA heavyweight strap holder David Haye (26-2, 24 KO’s) says he wants one of his comeback fights to take place in Dubai. It’s unclear why he wants the fight to be staged there, but it’s a great place in terms of taxes. There are regions that are tax free, and it would seem like an ideal place to stage a fight for that reason.

Haye hasn’t fought in two years since 2012, and he’s slowly rehabbing his right shoulder that he tore up last year while training for a fight against Tyson Fury. Haye expects his shoulder to be ready by next September for him to fight.

Haye plans on taking a series of tune-up fights, and then look to get a rematch against IBF/IBO/WBA/WBO heavyweight champion Wladimir Klitschko to try and avenge his loss to him from three years ago. The Wladimir fight would give Haye a nice payday similar to his previous fight against him that made Haye a millionaire. However, other than the money he’ll get for a second fight against the 6’6” Ukrainian, it’s difficult imagine Haye doing any better than he did last time. He’s too short, too light, and too defensive to beat a guy like Wladimir.

Haye is too much of a pot shot fighter, and you can’t beat Wladimir with pot shots. The guys that defeated Wladimir in the past – Corrie Sanders, Lamon Brewster and Ross Puritty – did so by attacking him with combinations and putting pressure on him. They were willing to take big shots in order to land their own punches. Haye is the opposite of all those fighters, which is why he’ll likely lose even worse the second time around against Wladimir.

“I want to have one of my big comeback fights in Dubai. It’s no secret I want to become heavyweight champion of the world again and I want Dubai to be part of that,” Haye said to Gulfnews.com. “To get back into the ring with Wladimir would be a dream come true for me because I know I can beat that guy on my day when all guns are firing. It’s one thing saying and another thing doing it, but I’m willing to walk the walk. There is no doubt I have a few wrongs to right and I’m currently on my mission.”

Haye is going to need to get ranked quickly because I can’t see Wladimir electing to fight him if he’s not the mandatory challenger. Haye did too much trash talking in the build up to their previous fight and I don’t think Wladimir will want to go through that again.

Amir Khan should concentrate on avenging his losses »