Cotto-Martinez: I told you so 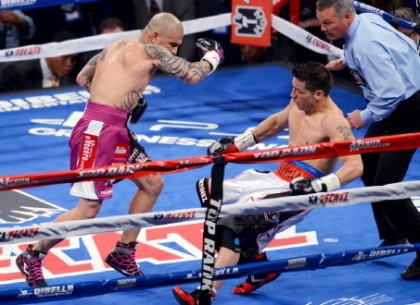 (Photo credit: Naoki Fakuda) By Jermill Pennington: How childish of me to take the opportunity to say I told you so. However, I never grew up so I’m fine with it. Last week I posted an article entitled “Sergio Martinez, who has he beaten” (http://www.boxingnews24.com/2014/05/sergio-martinez-who-has-he-beaten/) where I chronicled his history of opponents only to illustrate their similarities in styles in comparison to Frankenstein. Before I continue basking in the glory of me being right, and you being wrong, I will say that I predicted that Miguel Cotto (39-4, 32 KO’s) would wear down Martinez in 8, when in fact it was 9 so I was off.

How I came to that conclusion you ask? I looked at the last version of Martinez (51-3-2, 28 KO’s) I seen in action versus Martin Murray last year in April and in that fight knew that Sergio was fighting on whit. Once the physical factors you possessed to elevate you to that level diminish it is only a matter of time before the rug is pulled out from under you. We have recently seen this happen in the Paulie Malignaggi versus Shawn Porter fight.

I can be hard to see in these savvy vets, but even in a good showing versus Adrien Broner, Malignaggi in my estimation was living on whit. One thing I use as an indicator of a fighter diminishing faster than you may think is when you start to see pitter patter punches and lots of movement. In the Murray fight I noticed Sergio had no intention of sitting on any punches, rather just pitter pat the much slower Frankenstein-ish fighter. In that fight I also noticed that his ability to deal with the ruggedness of a fight for the full duration was not there and now see him quitting on the stool. On top of that reports saying the man just started walking under his own power early this year was more than enough for me to make my prediction.

This is the part where some are going to get mad. Since making my earth shattering prediction I have now started to call myself “Jermillstradomous” for the simple fact that I am 1-0 on predictions over the last week. (for the benefit of my ego I am using the smallest sample size possible) I almost hate to say this but as I have seen with Sergio and Malignaggi, I now see with Manny Pacquiao. Yes I know it hurts to say and I hope I’m wrong but we cannot say that since the Juan Marquez knock out we haven’t seen Pacquiao go to the pitter pat offense with movement.

These savvy vets still can blind you with smoke and mirrors, some master of deception like the Ali’s and Bernard Hopkins’s of the world can down right pull the wool over your eyes. You think of Ali lying on the ropes versus foreman all the while being completely out gunned. Hopkins versus Pascal doing pushups in the corner before the round started. These magicians of the ring are able to prolong their careers years after the tools aren’t as sharp but the inevitable end can always be the next fight away.

That said only time will tell, typing using only one hand is hard, trying patting yourself on the back and typing at the same time, not easy.

« Jones Jr: Martinez didn’t think Cotto could bomb him out