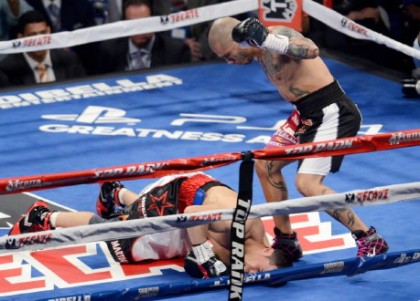 (Photo credit: Naoki Fakuda) By Daniel Hughes: The last trait of many a fighter to go is his ability to punch. It’s often been said that the punch resistance and the reflexes of a fighter can go overnight, especially in fighters that has come off a long layoff such as 39-year-old Sergio Martinez (51-3-2, 28 KO’s).

The credit has to be given to the 33-year-old Miguel Cotto (39-4, 32 KO’s) becoming the new WBC middleweight champion at Madison Square Garden in New York last Saturday night. He proved a lot of critics wrong and delighted his legions of fans in the process. A vintage Cotto took the fight to Martinez from the start, pressuring him constantly. Cotto, doing what he does so well, showed the ability to test the will and heart of his opponent. He did this to great effect against Martinez.

Cotto beat a real champion in Martinez, who had no doubt seen better day. Martinez’s will to win was there but his body, knees, especially were not there. Cotto gave him the answer he must have been wary of. Martinez had of course asked himself to go to the well one more time, but the Argentinian a proud man blamed no one afterwards. Martinez will, I think, now say enough is enough and retire from boxing. He has provided great entertainment over the years as has his victor on the night Miguel Cotto.

Cotto never gave Martinez a minute’s peace in the fight. Cotto carried out his trainer Freddie Roach’s strategy to the letter in attacking Martinez nonstop in the fight.

Martinez has had a stellar career but I think we’ve seen the last of him after his loss last Saturday night. He said he’s going to go away and sit down and think about what his next decision will be with his career. I hope he makes the sensible decision. He has thrilled fans the world during his career. His rematch and stunning knockout of Paul Williams was one of his most thrilling fights of his career.

Martinez must have been itching to turn on another performance like that against Cotto, but from the first bell you could see he was second best. Boxing the hardest sport in the world anyway and being second best on any given night does often become long and painful.

Martinez and his team believed he would have enough to beat Cotto. The reality a different thing. The question that a true warrior wanted an answer to is something he got which he couldn’t get from sparring and training. In the ring.

« Cotto-Martinez: I told you so