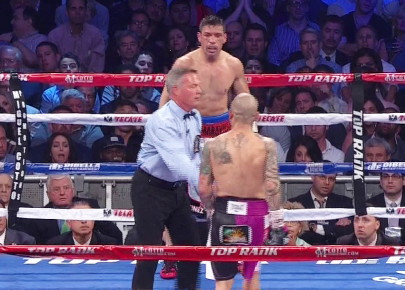 By Jay McIntyre: The greatness of an individual has often been attributed to that person being either in eventful circumstances or having an event-making personality. But this is an oversimplification because true greatness often requires an alignment of both.

William Shakespeare’s manipulative Roman character, Cassius, once remarked to his would-be conspirator that “the fault, dear Brutus, lies not in our stars, but in ourselves, that we are men.” When looking at what fighters are capable of accomplishing in the ring, sometimes their greatest achievements arise from the perfect combination of preparation and opportunity. A fighter can only rise so high on talent and guidance alone. A sense of timing and an exploitation of the stars – when they are in alignment – allows a fighter to reach beyond their grasp. Gene Tunney’s lopsided decision win over Jack Dempsey in 1926, Sonny Liston’s destruction of Floyd Patterson in 1962, and James “Buster” Douglas’ monumental upset of “Iron” Mike Tyson in 1990 all point toward a carefully honed fighter descending upon an unsuspecting champion at the perfect time. The usurper has hit his proverbial stride, while the champion – for whatever reason – has lost his own.

And so it was, that on Saturday, June 7th, Miguel Cotto was able to peel away the WBC Middleweight strap from the defiant, yet out-matched Sergio Martinez. The fight was one-sided and in between the ninth and tenth rounds Martinez’s trainer Pablo Sarmiento threw in the towel despite the emphatic pleas from the champion for “one more round.” To say that victory lay in the hands – or rather the gloves – of Miguel Cotto is only accurate when we step back and see that the fruit had become ripe for the plucking.

In the first round Miguel Cotto knocked down Sergio Martinez a jaw-dropping three times. Martinez had been knocked down in the past. But three times, in less than three minutes? That was unprecedented. Cotto’s left hook – his marquee punch – was devious in its intent, and ruthless in its execution. Martinez always had the habit of sliding off to his right (the left side of his opponent) and getting out of harm’s way, but he just kept getting caught by Cotto’s left hook. While Martinez’s right knee has been suspect to injury for the past several years let’s not be so hasty in giving credit to it for Martinez’s slow movement, because on many occasions, the knockdown was a result of Cotto’s clever foot placement. (For a full breakdown of his foot placement visit my blog at: a-neutral-corner.blogspot.ca)

Much of the fight after the first round was a foregone conclusion. Martinez was never a big enough puncher to turn the tide, and his real advantage – his speed and movement – were no longer there for him. He seemed faded and his edge was clearly dulled. Martinez said that it was the punches from the first round that he could never truly recover from, and that he had no problems from his knee during the fight. It is speculation to say that the knee injury was directly aggravating him throughout the fight, especially when the owner of the injury had denied such claims after his loss to make Cotto’s win a legitimate one.

What is not speculation is the knowledge that Martinez was still confined to crutches until December of 2013. A typical training camp for a professional fighter lasts around eight weeks but a fighter is expected to enter into this camp in optimal shape so that the trainer can focus on the particulars of their game plan. With this lack of time to fully condition himself for a twelve round championship fight, it is reasonable to say that Martinez was not as conditioned for this fight as he could have been.

If you are wondering what a fighter looks like after a 14 month layoff, two surgeries on a right knee in the past two years, a left hand that has been broken in both of his last two fights, and surgery on his right shoulder, then you will need only look at Sergio Martinez’s performance last weekend. Going into this fight, Martinez was a 3-to-1 betting favorite and had at one time been a top five pound for pound boxer on The Ring Magazine’s prestigious list. His loss to Cotto was – believe it or not – surprising, but hindsight has a way of giving us the clarity we lacked beforehand.

It may seem like excuses made by a jilted writer whose prediction for Martinez to win by unanimous decision invokes the words of a Robbie Burns poem (“The best laid schemes of mice and men go often awry”), but this information just so happens to be true. A stubborn champion stepped through the ropes against a very able, and very experienced contender, and he suffered a one-sided defeat. That also just so happens to be true. Reconciling these truths will lend itself to a greater clarity on our parts.

Preparation and opportunity. A resurgent contender and a hobbled champion. To attribute the tenth round technical knockout on Saturday night to Miguel Cotto would be to blind ourselves to the obvious facts in front of us. To say that Sergio Martinez had lost wholly on the fact that his knee was his tragic flaw would be just as foolish. But to accept that a great prizefighter defeated a great prizefighter at the right time cannot be disputed. What can be disputed, however, is what the stars have in store for each man as we, the fans, play the role of oracle.
For more boxing news and analysis, follow me on Twitter for updates at: @JayMcintyre83