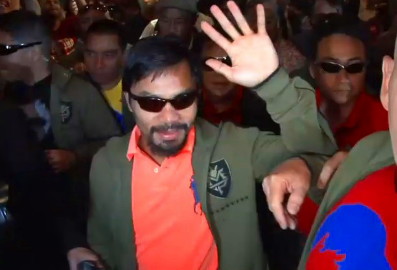 By Chris Williams: Sports Illustrated is reporting that their sources are telling them that the April 12th rematch between Manny Pacquiao and Tim Bradley brought in between 775,000 to 800,000 pay-per-view buys on HBO. There’s been a delay in the release of the official PPV numbers by HBO and Top Rank, so we’re still awaiting what they’ll be reporting. These PPV numbers are far, far below the 2.2 million PPV buys that Floyd Mayweather Jr’s last fight against Saul “Canelo” Alvarez brought in last September. Mayweather’s numbers were over twice as many, and that makes it even more difficult to arrange a fight between Mayweather and Pacquiao.

The PPV numbers for the Pacquiao-Bradley 2 fight are an improvement from the 475,000 for the Pacquiao vs. Brandon Rios fight last November, but the figures are below the 890,000 that the first Pacquiao vs. Bradley fight generated in 2012. The fact that Pacquiao’s numbers were below that could be from fan exhaustion at seeing one too many retread fights involving Pacquiao being matched against the same opponents. Since 2004, Pacquiao has fought Juan Manuel Marquez four times and Bradley twice. Those are six fights between the same guys.

The first fight between Pacquiao and Bradley was a dull affair with Bradley winning a decision that some fans didn’t agree with. While I had Bradley the winner, it was still a less than exciting fight. Bob Arum, the promoter for Pacquiao and Bradley, should have known better than to put on a rematch between them.

Pacquiao’s fights once were almost guaranteed to bring in over 1 million buys. From 2009 to 2011, Pacquiao was able to hit the 1 million+ PPV buy mark numerous times, even for mismatches against the likes of Shane Mosley and Antonio Margarito.

At the end of this year, Pacquiao’s contract with Top Rank will be expiring, and he’s got a big decision to make in terms of whether he should stay with Top Rank or move on. If Pacquiao stays with them, he’s going to need to fight bigger guys like Sergio Martinez and Miguel Cotto, because he’s not going to bring in a lot of PPV buys fighting Arum’s Top Rank stable fighters like Jessie Vargas, Bradley, Ruslan Provodnikov, Mike Alvarado, Terence Crawford, and Juan Manuel Marquez. The Pacquiao-Marquez 5 fight may bring in decent numbers, but no way will they go over 1 million buys. Fans have seen that fight way too many times for them to get excited about watching them fight for a fifth time.

Mayweather: Bradley and Marquez showed Pacquiao he wasn’t on my level »