Floyd’s continuous tirade against Pacquiao shows how bitter he is 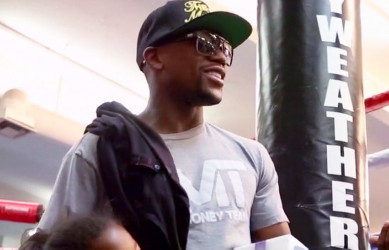 By Juan dela Cruz: It is noticeable that for the past several months, Floyd Mayweather Jnr had been continuously bashing at Manny Pacquiao and making anger inducing comments through the social media or through some interviews in the net despite the fact that the eight-division world champion had only nice words for Floyd.

Actually, Floyd had done these before even after the first failed negotiation. This shows only one thing, Floyd’s bitterness against Pac. Mayweather’s apparent dislike for Manny is unparalleled. But what could be the reason? Have Pacquiao done something against Floyd? Because of Floyd’s continuous unwanted rants against Manny, he’s now becoming the laughing stock of the boxing world, but on a different view, he looked pitiful in what he was doing.

There could be several reasons why Floyd is doing this, but the most noteworthy is his being envious of Pac’s achievements. Firstly, it is only Pac who accomplished being an eight-division world champion, a feat that Floyd cannot, at the very least, get near into. Duplicating this feat also meant impossibility for Floyd. Second reason could be the support given by the world to Pacquiao.

Remember, Pac is a global icon while Floyd is popular only in the states. This is also the reason why global brands opted to have Pacquiao as their endorser instead of Floyd despite the fact that Floyd is an American and owners of these companies are Americans too. We could recall that Senator Harry Reid had Pacquiao endorsed him in their senatorial elections. We may ask, why would Sen. Reid choose a Filipino to endorse him to his fellow Americans for their votes instead of another American? The answer is simple, Pacquiao is more popular and epitomizes the character of a great leader who can lead his men to follow him, and not pay them to earn their obedience.

Another thing that Floyd could be envious of is their legacies in this sport. Remember, it was Floyd who declared himself as a great boxer, but in the case of Pacquiao, it is the world that says he’s one of the greatest or that he could be an all time great. I remember Floyd when he was begging for the support of his countrymen, he said Americans should always be at the back of their soldiers and that Americans should support Americans. This could be his answer to Pacquiao’s large support of his fellow Filipino who were always with him win or lose. Floyd never had this kind of encouragement from the Americans.

Another reason for Foyd’s possible detestation for Manny is the amount of money he lost when the mega fight did not come into fruition. Deluded haters are saying Pacquiao run away from $40M dollars. They didn’t see the other side of the coin where Floyd lost more than a hundred for that supposed fight. He may have been bitter that he could earn that money in a single fight and yet he can’t risk his “0”. He cannot figure how he can defeat someone he can neither bloat nor drain as what he had been doing to all of his opponents. He can’t figure how a featherweight demolishes bigger opponents in heavier division and come out unscathed and even had a concert afterwards. All he can do is concoct stories of PED use which he was not able to prove in or out of the sports.

To make it look like it was Pac who needs him and not the other way around, Floyd made several baseless comments against Manny. The last was Pac’s supposed $68M tax problem with the IRS as he stated in his recent interview at the Fight Hype. My belly was aching while I was laughing when I read this comment from Floyd. Firstly, the supposed amount is only $18M, and secondly, the problem had been solved as it was already cleared that Pacquiao never owes the IRS, not even a single cent, any amount for the tax. And lastly, liens on his properties were already being lifted. So if Floyd is saying Manny wants him to solve his problem, that’s a total lie.

Whenever Manny is around, it seems Floyd cannot have a peace of mind. If I were him, I’ll just move on with my life. Pacquiao had already move on that’s why he’s on peace. Pac knows dealing with Floyd is only a waste of time. He knows very well Floyd will do anything to avoid the fight that’s why Pac never bring up Floyd’s name in any instance despite on the contrary, Floyd had been mentioning Pac’s name even if he was not asked about the People’s Champ. Mayweather’s advisers should tell him what he should do or say in an interview. He looked aghast whenever Pacquiao enters his mind. He should just shut his mouth and continue with what he is doing, that is avoiding threats to protect his “0” by either bloating or dehydrating his opponents he called “solid”.