Mayweather wants Canelo for his undercard on May 3rd 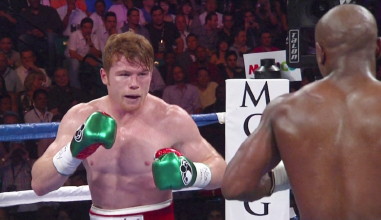 By Dan Ambrose: Floyd Mayweather Jr. is hoping that former WBA/WBC light middleweight champion Saul “Canelo” Alvarez will agree to fight on his May 3rd undercard in Las Vegas, Nevada. Mayweather sees this as a beneficial move for both of them because it’ll make the pay-per-view numbers that much bigger with the red-haired Canelo in the co-feature bout against someone like IBF junior middleweight champion Carlos Molina.

I agree with Mayweather. Canelo shouldn’t try and fight off of Mayweather’s card yet because he hasn’t picked up the fans necessary for him to go off on his own. Canelo did well in fighting Mayweather last September and benefiting from Mayweather’s Midas touch in bringing in fans to purchase the fight on PPV. But Canelo needs more time before he can start headlining his own fight cards. At 23, Mayweather wasn’t a PPV fighter. That didn’t come until much later after he had built up his name following his win over Oscar De La Hoya back in 2007.

Mayweather doesn’t want Canelo to be stubborn and choosing not to fight on his undercard just because he was beaten soundly last September. Mayweather wants Canelo to forget about the defeat and come back with him and stay in the family so that they can keep bringing in huge PPV numbers as a team. A Mayweather card with Canelo on it is a much bigger card than either of them can get fighting alone. Canelo needs to realize that before he starts thinking about head-lining his own card in a fight against Molina or Alfredo Angulo.

Fans aren’t going to be excited about paying to see Canelo fight Angulo or Molina on PPV. But they would be interested in seeing that fight if it was on the same card as Mayweather. The two of them could work together well as a team until Canelo becomes a crossover star in the United States the same way De La Hoya did. Right now, Canelo still isn’t at that point because he’s only had a handful of fights in front of U.S fans. He needs more time and more visibility. The best way for Canelo to do that is to keep fighting on Mayweather’s undercards, but preferably against better opposition than Molina or Angulo.

Mayweather also wants Adrien Broner for his May 3rd undercard. If he could get Canelo and Broner on the same card in separate fights, of course, it would bring in huge PPV numbers on Showtime.

« Merchant: Will Broner become the next Berto?